NOKIA, Finland—Though she’s now leading the Open Women’s division after round one of the storied European Open, on Wednesday Paige Pierce was just happy to make it here for her Presidents Cup tee time.

“I didn’t have any delays,” a somewhat perplexed Pierce said Thursday afternoon. “My first flight just landed at 10:30 in the morning [in Iceland] even though my connecting flight left at 7:30. I went to the service counter, and there wasn’t another flight leaving that day, so I had to stay in the airport for 12 hours.”

The travel issues found Pierce sleeping on the airport floor—barely—and arriving in Nokia at 9 a.m. Wednesday. That left her far behind schedule and with little practice for this week’s battle with The Beast, her play during Wednesday’s team competition serving as the majority of her on-site preparation for Thursday’s opening round at a PDGA Major.

Amazingly, though, a resilient Pierce—the 2013 European Open Champion—is still leading the pack after day one. 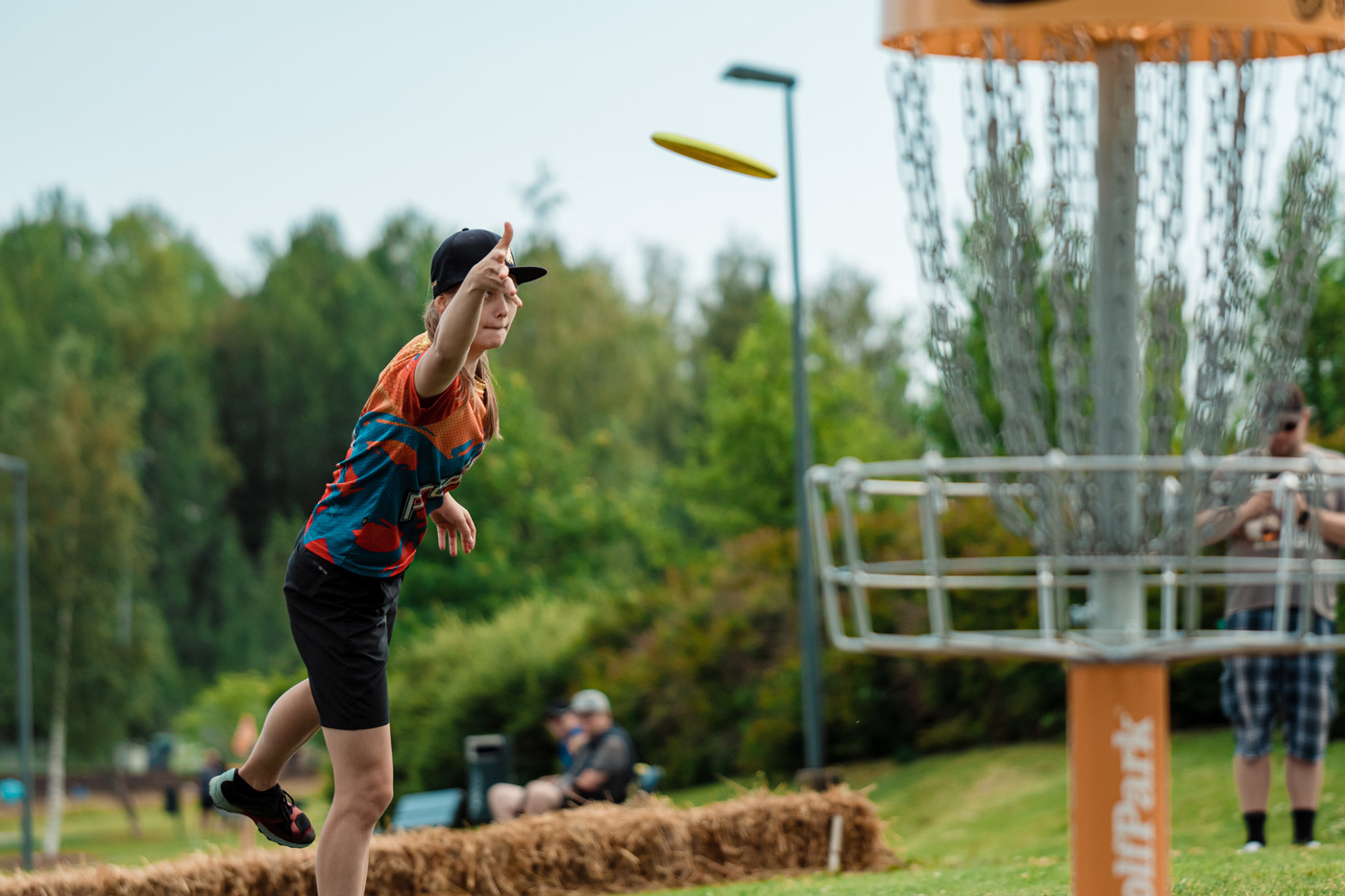 The four-time PDGA World Champion turned in a 3-under par 61, putting her just ahead of the 1-under par 63 from Europe’s highest-rated female player, Finland’s Henna Blomroos. Eyes will also be on the U.S.’s Catrina Allen, who tossed a 2-over par 66 to land in third place, and Estonia’s Kristin Tattar, whose 3-over par 67 earned her the last spot on Friday’s lead card. Eveliina Salonen, widely viewed as one of the tournament’s European favorites, will top the chase card after a 5-over par 69 start.

Though Pierce came out ahead, Blomroos was the leader for much of the round, starting out with a 4-under par, bogey-free front nine. On the course’s back half, errant lines and some lost putting confidence led to bogeys that allowed Pierce to catch up.

“The putting was a little bit scary today, and there was a little problem with the grip,” she said. “Tomorrow, I want to change my putting and also play safe—no OBs.”

Pierce, meanwhile, saw Thursday’s round as a chance to continue acclimating to the course. But even with strong birdies like those she earned with spectacular circle 2 putts on the par-3 6th and par-4 10th, Pierce certainly has some tidying up to do. The Texas native bogeyed the 116-meter 2nd, a left-to-right par 3 lined with OB on the left, after straying outside the lines.

“For hole 2, I’m either landing out of bounds or overcompensating and flipping it,” she said. “It’s not bad with a par, but I should still at least be getting a putt and not giving a stroke away with a bogey.”

The 120-meter 11th, a par 3 that has tight OB and water surrounding the green, has long vexed Pierce in her time abroad. 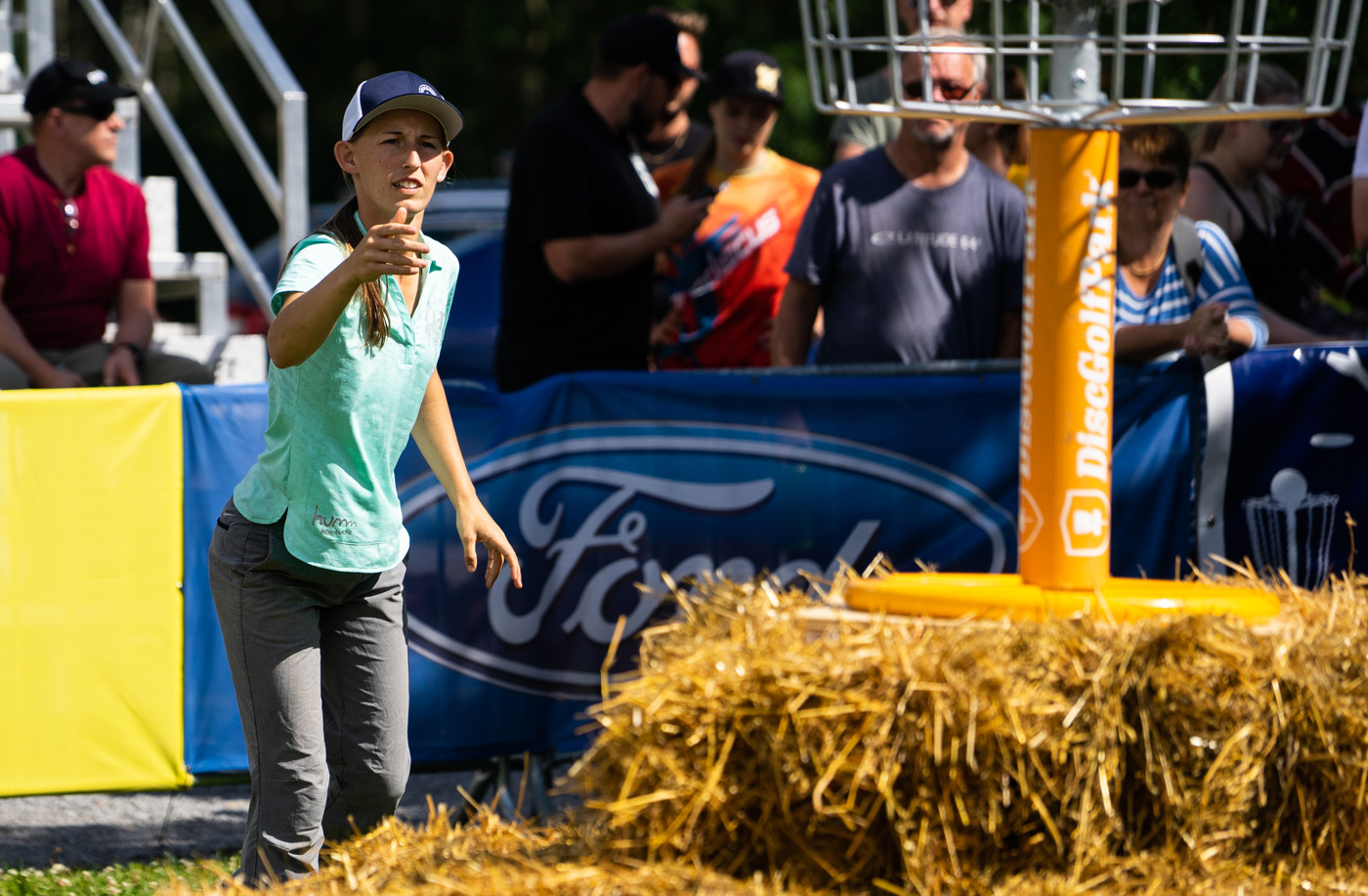 With these changes, Pierce thinks herself capable of turning in the hot Open Women’s score for each of the tournament’s four rounds. But she isn’t underestimating the magnitude of that task.

“I think I have a lot of really talented competitors, even on the second card,” Pierce said. “I can’t take any breaths—need to be on my toes throughout the next three rounds.”

And those competitors all showed flashes of brilliance Thursday. Like Blomroos, Allen turned in a very solid front with three birdies—two of which came from connecting on circle 2 putts—and no bogeys, only to allow some putts and drives get away from her on back nine. Tattar and Salonen were also just a few errant shots away from being much closer to the lead.

The Open Women’s lead card tees off for round two at The Beast Friday at 8:40 a.m. local time.