NOKIA, Finland—Through 16 holes of Thursday’s opening round of the European Open, 20-year-old Finnish pro Jesse Nieminen wasn’t just taming the course known as The Beast; he was slaying it, taking a bogey-free 14-under par into Nokia DiscGolfPark’s daunting final two holes. Run that gauntlet successfully, and he could etch his name into the history books with a course record at these hallowed grounds.

The Beast, though, bit back on holes 17 and 18, as Nieminen succumbed to the hungry course’s painted lines and carded consecutive bogeys to finish with a 12-under par 52. His consolation prize for coming up just shy, though, is nothing to scoff at: He’s in sole possession of the lead after day one of this PDGA Major.

Nieminen’s course record-tying tally clocked in with a 1077 rating—a massive 55 points above his average player mark—for the best performance of his young career, a round that has him one stroke better than Ricky Wysocki. The two-time PDGA World Champion tossed an 11-under par 53 to land in second place through 18 holes, while Paul McBeth and Eagle McMahon also felt The Beast’s back teeth and missed opportunities to land on the top of the leaderboard. Instead, the pair sit in third place after matching 10-under par 54s.

On a day where several Finns stood out—Väinö Mäkelä, Niklas Anttila, and Teemu Nissinen are all in the top 10—it was the relatively unknown Nieminen whosurprised the most. A native of Juankoski, a city of roughly 2,000 residents about five hours northeast of Nokia, the soft-spoken right-hander sports a power forehand game well-suited for this track. He leaned on it heavily en route to an 89 percent fairway hit rate and a tournament-best 78 percent circle 1 in regulation showing.

“I had a really solid round,” Nieminen said. “The last two holes were not that cool, but only single bogeys so that’s decent at those holes. Tough ending stretch at The Beast.”

Despite a hot start where he rattled off 11 straight birdies, Nieminen said he didn’t know the course record and, as a result, wasn’t gunning for it late. Instead, he’s the type of player who opts not to check scores, simply keeping his head down and moving forward. It’s a mentality that belies his age.

“I always tend to have pretty good first rounds at the tournament, so just trying to keep it going at this four-round tournament,” he said. “No, like–I don’t need to really get too excited at this point. I have three rounds still to play.” 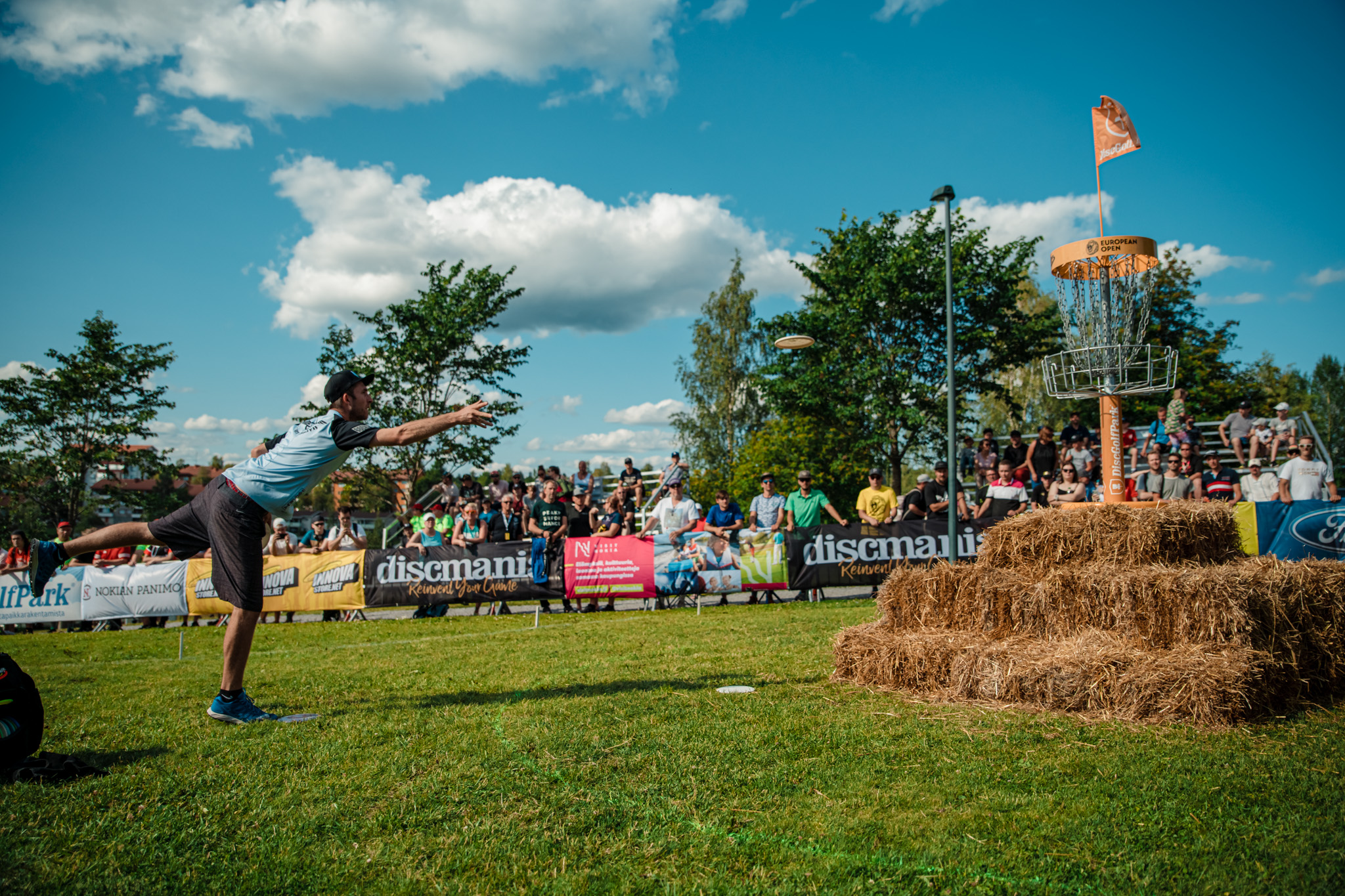 Wysocki, meanwhile, said he was trying to set his own hot pace after a sluggish early performance at last week’s Estonian Open. It was his back nine, though—in particular, a run of four consecutive birdies from holes 10 through 13 where he connected on two putts from 13 meters—where he feasted.

“The last couple tournaments I’ve been getting off to a rough start, so I wanted to come out here today and change that,” Wysocki said.

Playing together on the opening round feature card, both McBeth and McMahon wowed with their accurate distance—usually— and marksman-like putting. McBeth, though, hit a slow patch that was punctuated by a bogey on the 120-meter 11th when he hung his tee shot too wide right and it faded into the OB water that guards the pin. After a long walk to hole 12, though, he was ready to bounce back. 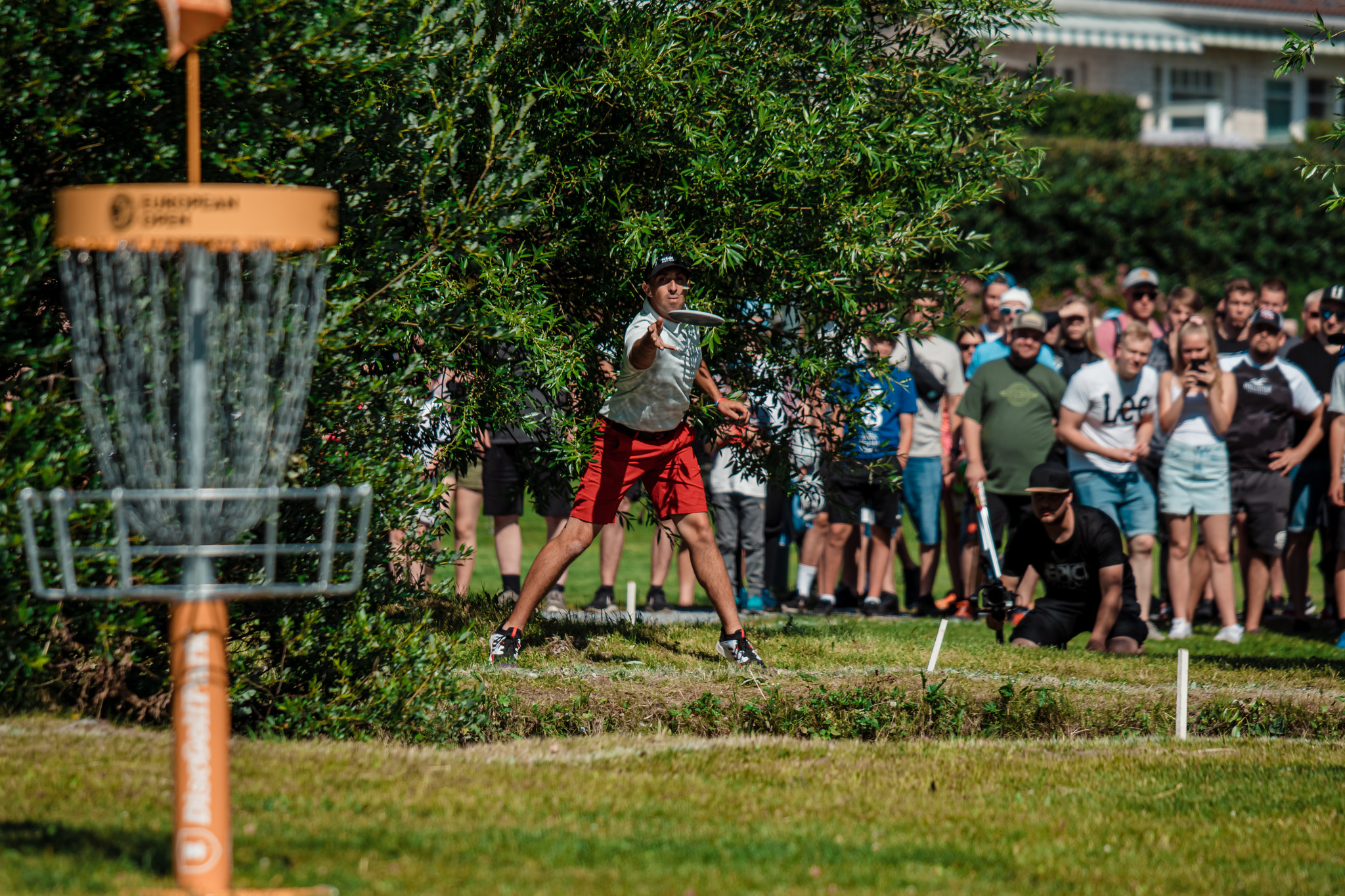 “That transition there—throwing OB in the pond was pretty easy to overcome because the next shot for me is just a big, ripping turnover shot over everything,” McBeth said. “Usually when I make mistakes it’s kinda what I wanna do is rip the disc really hard because I’m frustrated, so it actually works out there where I get to do that and unleash on it and clear my mind.”

He was denied that opportunity for release on hole 18, though, when he entered with an 11-under par and a chance for a share of the lead. Instead, in a play that found him “overcompensating” for his miscue on 11, McBeth fired his second shot wide left and had to settle for a chip-up shot on the way to another bogey.

“Just let it go early,” McBeth said. “…I should have thrown it harder and trusted the disc.” 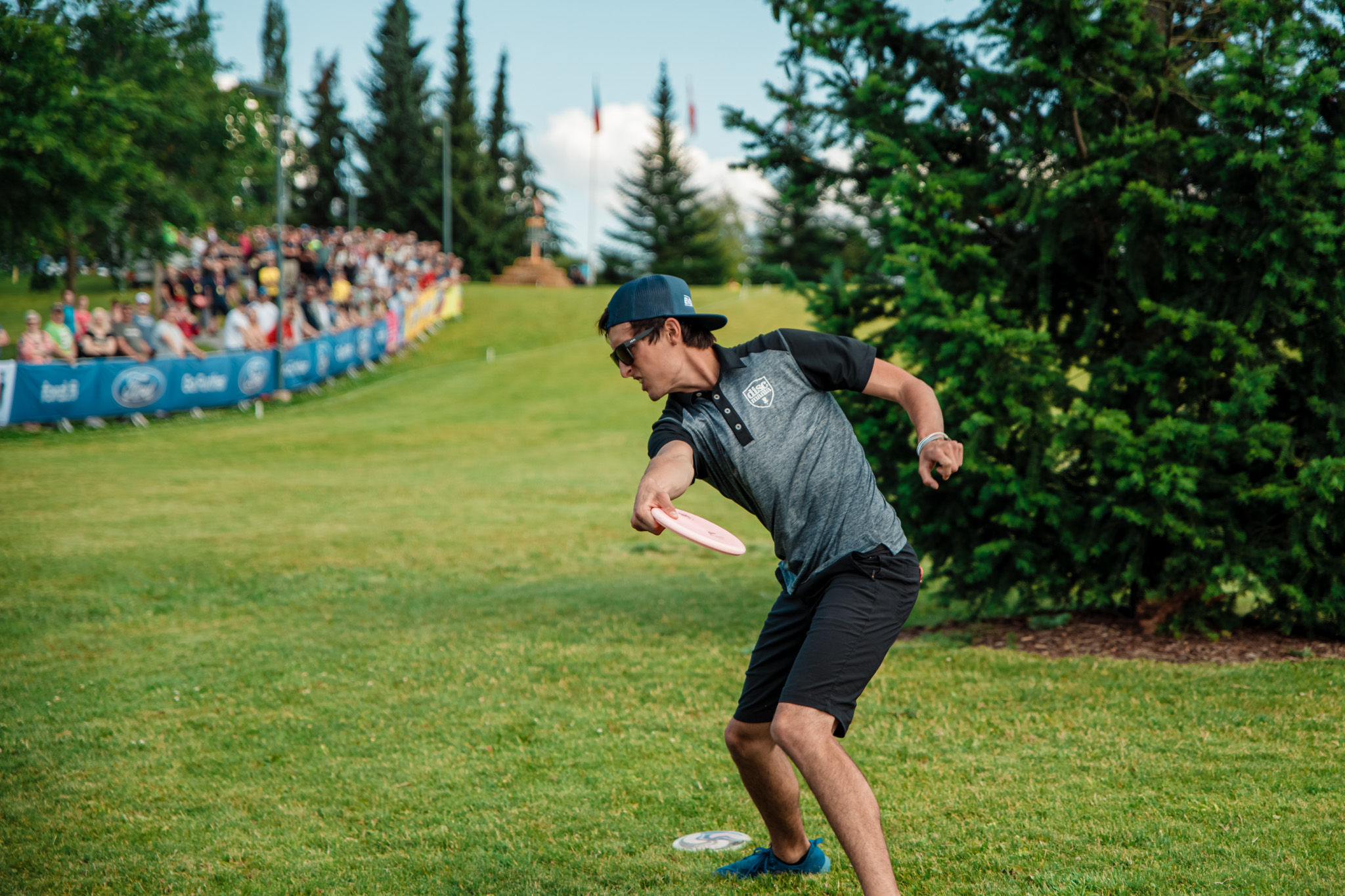 McMahon had his own control issues trying to get onto hole 16’s island green. He was pinched up near the right-side OB line off the tee, and he said that lie was different than he had practiced. It left him struggling to dial in the power required to both clear the hay bales and fly straight, and he trudged back to his bag three times before finally landing safely.

Since the hole plays with buncr hazard rules—meaning that every extra throw for McMahon was treated as one penalty-free stroke—he was able to escape with a simple bogey 5.

“Which honestly I was pretty happy about, considering I stopped the bleeding,” McMahon said. “With that buncr rule on there it feels a lot worse than it actually is.”

McMahon then stared down a 15-meter semi-death putt to connect for a birdie on hole 17 to right the ship. It was a moment of composure that highlighted his growth as a pro.

“I figured, I still had a really good round going,” McMahon said. “On 17 I was just outside the circle—really sketchy putt—but it was right in kinda my comfort zone, so I just convinced myself run the putt. Made it and got to 10 [under].”

Mäkelä, Anttila, and reigning Estonian National Champion Albert Tamm are tied for third place and with Nissinen at eighth make up Friday’s chase card. James Conrad’s 8-under par 56 put him in ninth place, while 2017 United States Disc Golf Champion Nate Sexton headlines a seven-way logjam for 10thplace at 7-down. His commentary partner Jeremy Koling, who is also in that 10th-place grouping, aced the 100-meter, par-3 5th. 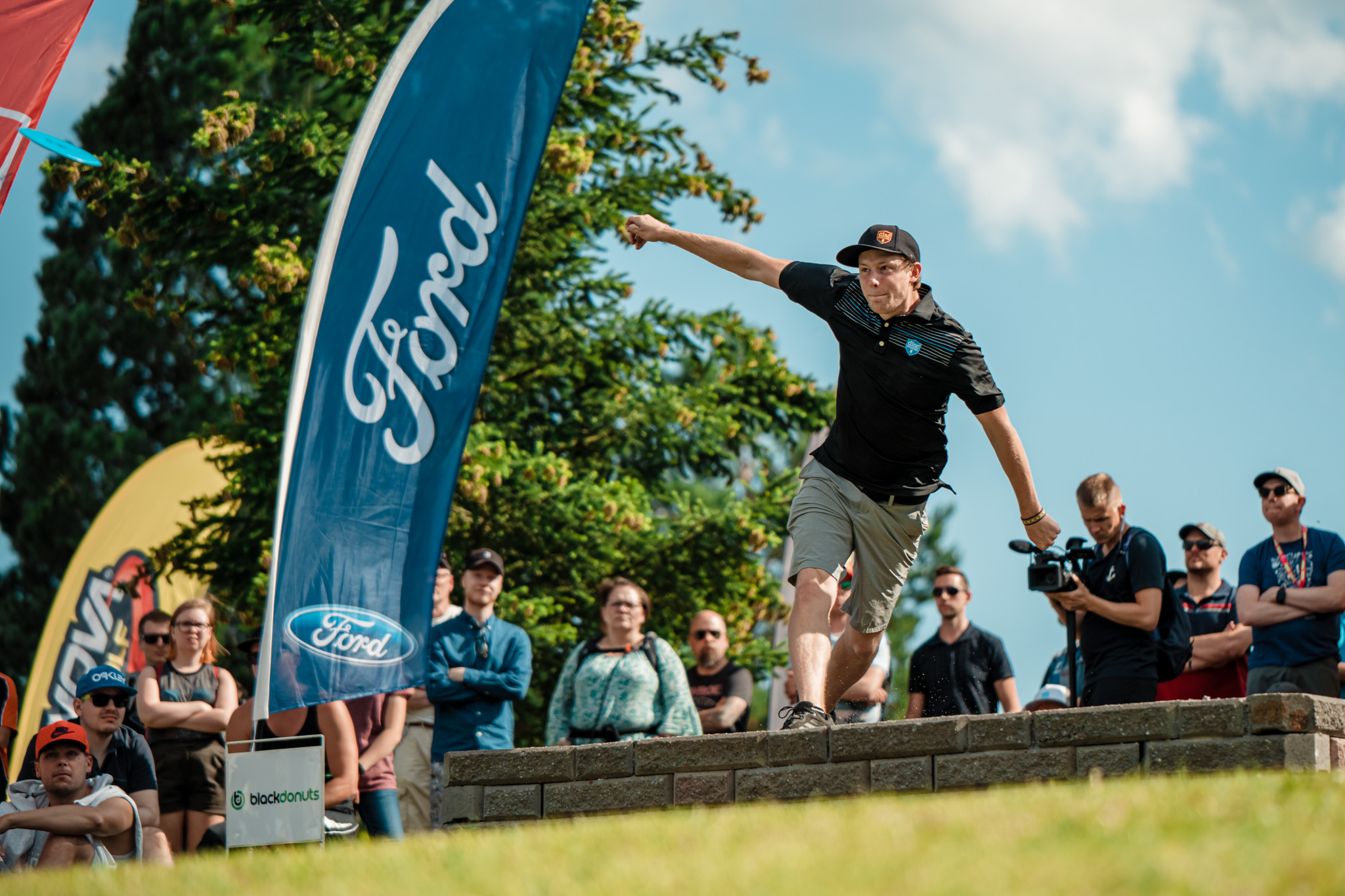 McBeth, who joked that he wasn’t sure if he should offer advice to a competitor during the tournament, delivered some veteran wisdom for Nieminen, who will more than likely experience a serious case of nerves as the least experienced player on Friday’s lead card.

“Everyone’s gonna be rooting for their hometown player, so just kinda enjoy it,” McBeth said. “What do they say? ‘Live in the moment,’ or ‘Be in the moment?’ That’s probably the biggest thing, is just be in the moment and enjoy it. Playing careers are pretty short, so enjoy it while you can.”

Nieminen, to his credit, wasn’t yet showing any signs of distress at the prospect of being in the spotlight.

“Of course it’s an honor,” he said. “It’s really, like, good to see that the practice I have done throughout the years has paid off. It’s always the same—we play the same course every round if I’m on the lead card or not, so try to play my own game and keep doing what I’m doing right now.”

Stat of the Day

Event director Jussi Meresmaa estimated the gallery at 1,200 people. It was day one of the tournament.

The Open lead card tees off at 2 p.m. local time Friday (UTC+3). Instant scoring and statistics can be tracked via UDisc Live, and shot-by-shot coverage will be available Saturday on The SpinTV.