Rest of Open Women’s contenders struggle through a windy round

NOKIA, Finland—Holes 4 and 5 of The Beast hit Texan Paige Pierce hard during round two of the European Open. On 4, a wooded, 155-meter par-4, her driving putter wedged in a tree in the shape of a taco. From there, the hole snowballed to a double bogey. She then three-putted on 5, causing a drive into circle 1 to quickly devolve from birdie to bogey.

Pierce, the leader to start the day, had gone 3-over in two holes, while her nearest competitor, Henna Blomroos, parred both. They were are all tied up at 2-under par, and it looked like the real battle was about to begin.

But then Pierce went into high gear while Blomroos—and the other players near the top of Open Women—stalled out.

The only change to Saturday’s lead card from round two is that Kristin Tattar is dropping down to the chase after her frustrating day allowed Eveliina Salonen to move into fourth with a 12-over par 140 total after two. 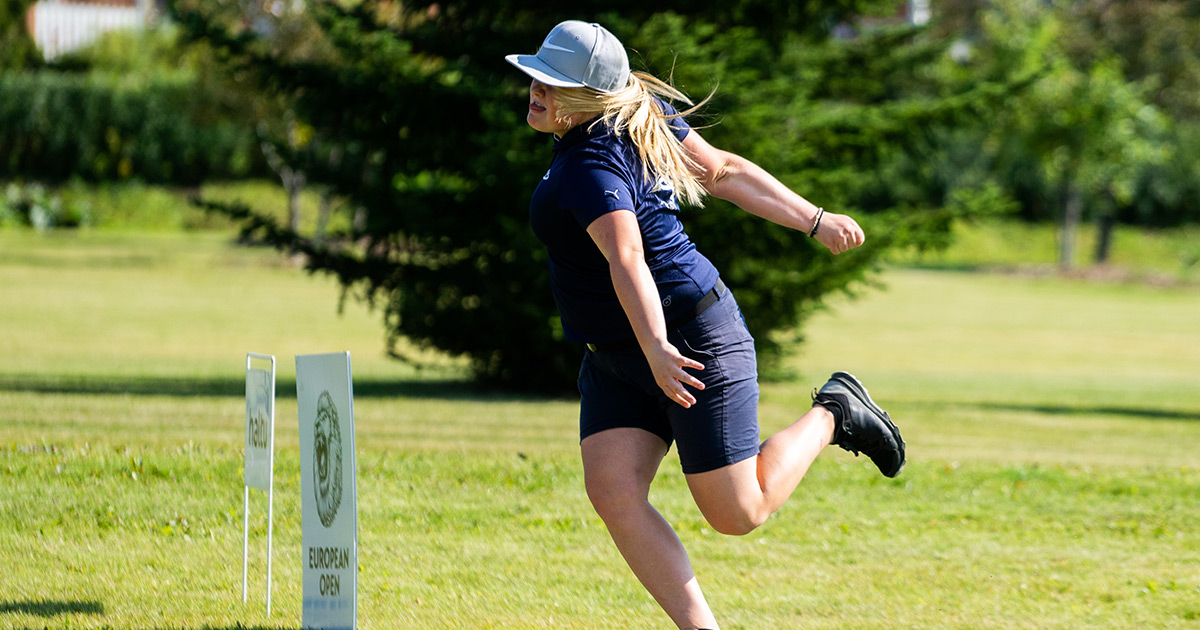 Pierce: “I Expect To Win”

It was a windy day in Nokia, and that added difficulty was reflected in most players’ scores. Though Pierce acknowledged the increased challenge, she also believed it added the benefit of forcing her to hone in her focus.

“I had to adapt because of the wind, throwing discs I didn’t plan on throwing,” Pierce said. “I was having to improvise, and it was making me think about each shot a little bit more intently…Just motivated, really.”

Nothing backs up her theory more than an impressive feat on the treacherous, 139-meter (459-foot), par-3 17th. Along with its length, the hole is lined with OB on both sides and has a right-to-left slope that is at its steepest on the green. At the time she played the hole, only five other players—all in the Open division—in a field of nearly 150 men and women had carded a birdie there.

Pierce made it six.

“I was just so excited,” Pierce said. “It’s one of the toughest, best-designed par 3s that I’ve ever played…With the strong headwind I had to club up to my most overstable Bio Defender and just trust that it was gonna hyzer back. I put a little turn on it, it glided in the headwind…and luckily I just put the correct angle on it.”

Pierce believed from the tee that her drive had landed far enough from the pin that she would have to lay up to protect her lead. But when she saw her disc nearly parked, she exclaimed to caddie Tina Oakley, “Oh no! I can’t lay that up. I have to go for it.”

When asked if she saw herself in her current position when the tournament began, Pierce responded with confidence.

“I expect to win every tournament I play,” Pierce said. “That’s not supposed to be this cocky thing; we all do…These are the best women in the world and every one of us thinks that we’re going to win the tournament.”

Pierce said she is generally satisfied with her play so far, but she does have a goal of going OB-free as play continues. (She had three OB penalty strokes Thursday and one Friday.) 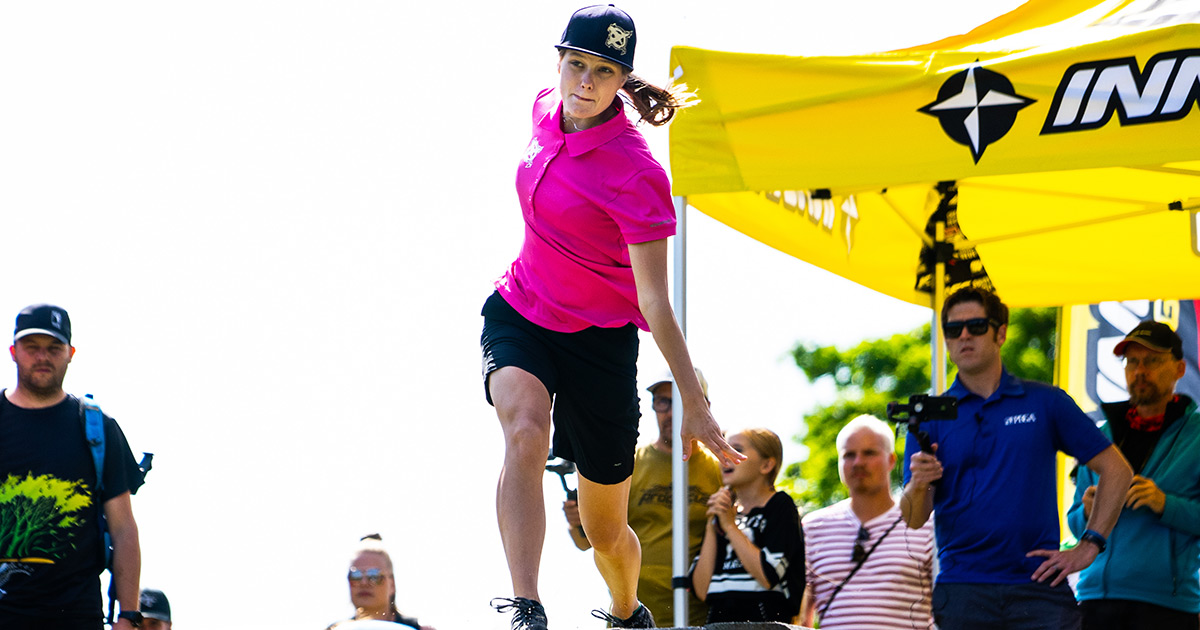 Hard Times For Those Behind

Whereas Pierce’s powered through adversity with a resilient spirit, it’s likely that both Blomroos and Allen will mostly be dwelling on their mistakes as they wait for the start of round three.

Blomroos started strong with birdies on holes 1 and 2, but after that she didn’t find another one until hole 14—a stretch that included five bogeys. On the course, Blomroos was visibly frustrated, and her shoulders often slumped after errant shots.

When asked how she felt about her round, the answer came to her without hesitation.

And even with two rounds to play, Blomroos was not optimistic when asked if she still believed she could catch Pierce. 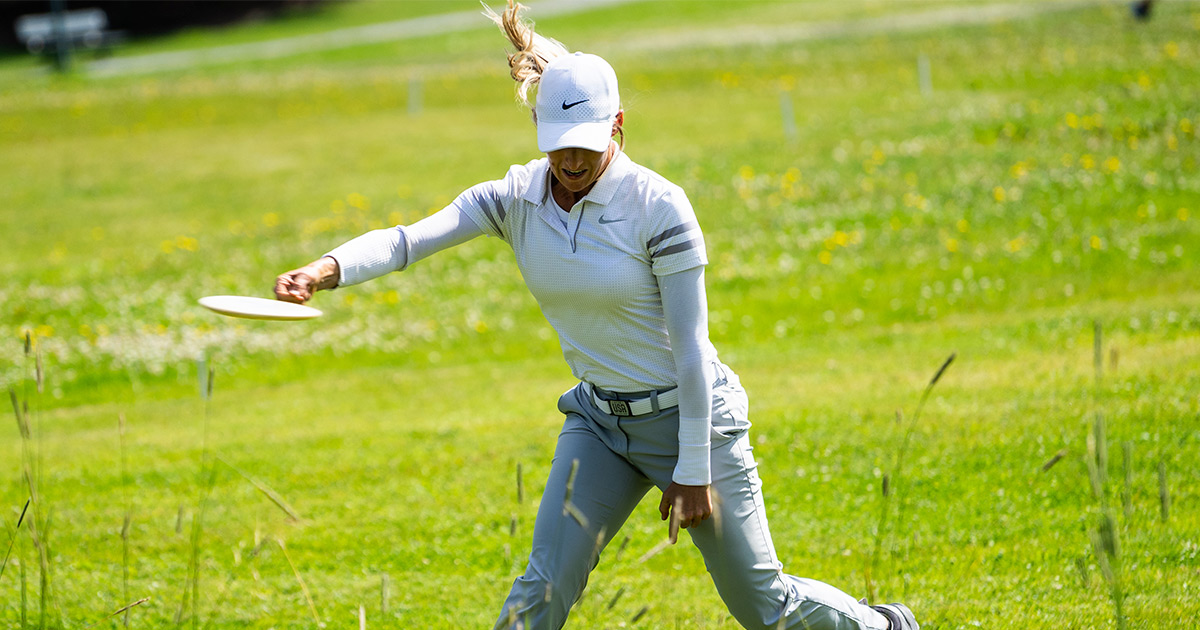 Allen had seemed satisfied with most aspects of her round until she reached the OB-infested fairway of the par-4 15th. Though her first shot was far more short and left than is ideal, she landed safely. Her second shot, intended to be a simple lay-up play to the fairway over an OB creek, had too little power and landed outside the lines. Throwing her fourth after the penalty, Allen opted to go for a blind anhyzer putter shot to attempt to give herself a putt to save a bogey. That just barely crept out of bounds long on the tight, peninsular green. She then three-putted to take a quadruple bogey 8 on the hole.

The difficulty only had a chance to build on hole 16 with its infamous hay bale-lined island green. There, Allen threw a drive too short to make her comfortable going for the island, so she sacrificed a stroke to lay up to a position for an easier run. The ploy didn’t work as intended, however, and it still took Allen three attempts to make the green, which is played with only a penalty of distance and does not add OB strokes. Two putts later and she finished the hole with a triple-bogey 7.

With four holes left to play, Allen had been at even-par. After those four holes, she was at 8-over. It was enough to make any player upset, but Allen remained collected throughout. Doubtlessly, she’s looking forward to getting revenge on that section of the course on moving day.

The Open Women’s lead card tees off for round two at The Beast Saturday at 1:20 p.m. local time. Instant scoring will be available from UDisc Live, with shot-by-shot footage coming out on The SpinTV.