McBeth holds in second, while Hannum makes a move to third place

NOKIA, Finland—Ricky Wysocki had just finished tallying his score after another day of 11-under par golf here at The Beast, ready to be shepherded away for media obligations as a throng of eager spectators gathered around players in search of signatures and selfies. A shirtless fan was first in line and offered up a translucent teal disc for the two-time PDGA World Champion to adorn with his signature.

“I love you, Ricky,” the man said with a hurried Finnish accent. “Go win this [thing].”

It’s moments like those that define the European Open just as much as consistent performances like Wysocki’s. He’s now sitting atop the leaderboard with a 22-under par 106 total at the midway point of this PDGA Major, a pair of throws ahead of longtime rival Paul McBeth. The defending European Open Champion and four-time winner here in Nokia left a couple shots on the course, but he still emerged with his second straight 10-under par showing to move to a 20-under par 108 overall. Austin Hannum matched McBeth’s round score to move seven slots up the standings and into a tie with Eagle McMahon, whose late-round hiccups marred an otherwise solid 7-under par performance. He, Hannum, and Estonian National Champion Albert Tamm sport 17-under par 111s, while first-round standout Jesse Nieminen slipped to sixth place at 16-down. 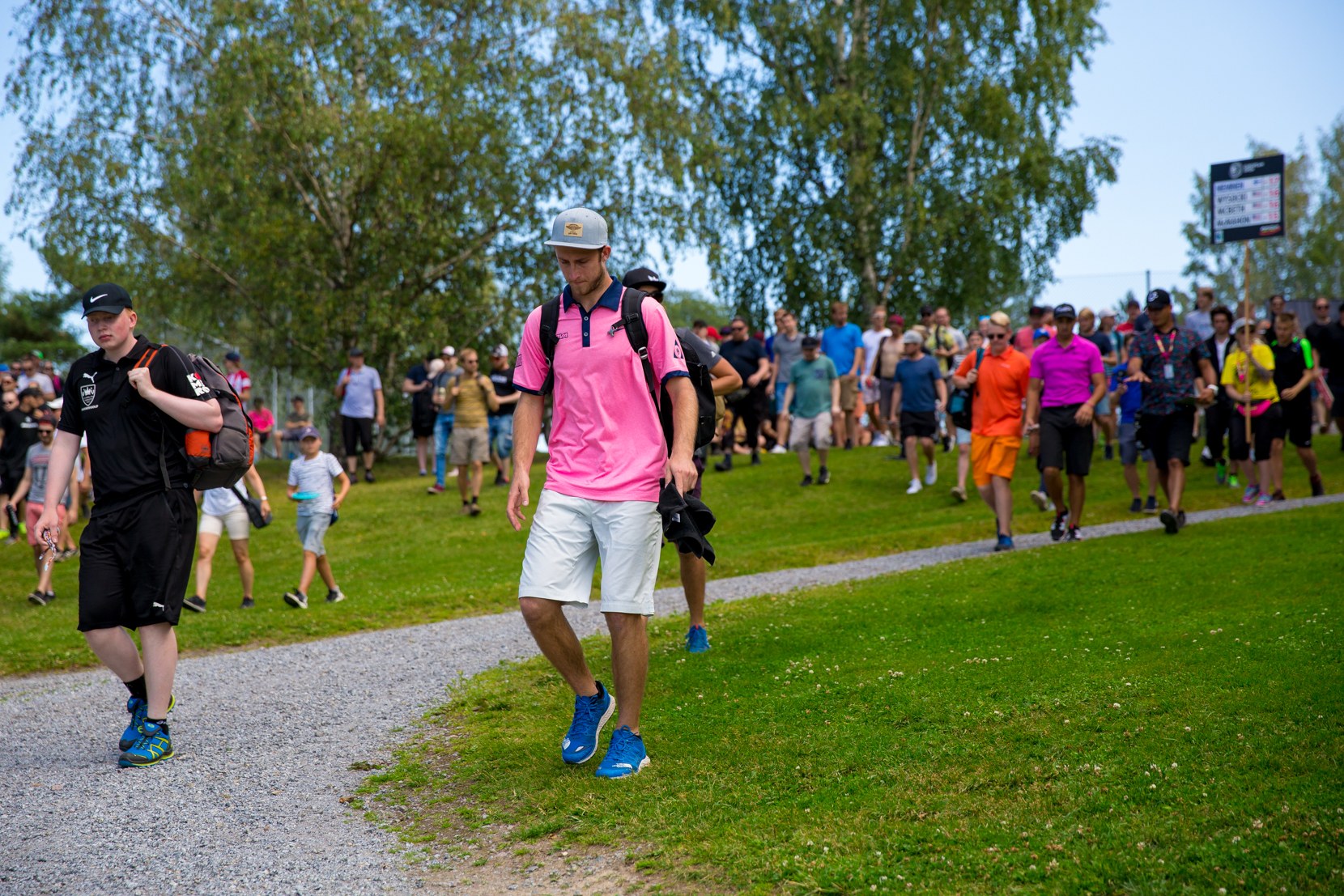 For Wysocki, those fan interactions are what make him fire on all cylinders like he has been this week.

“This is by far the biggest gallery, the most supportive fans I’ve ever played in front of, and it’s awesome,” Wysocki said. “I can’t even wait. Today’s Friday. Saturday, Sunday is gonna be double, even triple [the number of people], even maybe more.

“The sport’s growing in Finland, it’s showing with the spectators,” Wysocki continued. “But it does add a little pressure when someone comes up to say, ‘Hey, win this thing, keep it going, keep all the birdies going,’ when I’m on a birdie streak or something like that. There’s a lot more pressure than normal, but I think I like that.”

His scorecard showed it. After spraying his tee shot wide right and into the out-of-bounds road alongside the 155-meter 4th, which led to a bogey, Wysocki inhaled the stress and exhaled execution. He then connected on two circle’s-edge bids for deuce on 5 and 6.

The recovery, though, was just beginning. After scrambling for par on the birch-lined, 168-meter 7th, Wysocki went on a tear and logged seven consecutive frames under par.

“My upshot game’s really good right now, and I’m saving a lot of pars if I go OB on the tee shots, and if I’m in the fairway I’m getting up and down for birdie,” Wysocki said. “I like where my game’s at right now and I really feel like I’m in my comfort zone.” 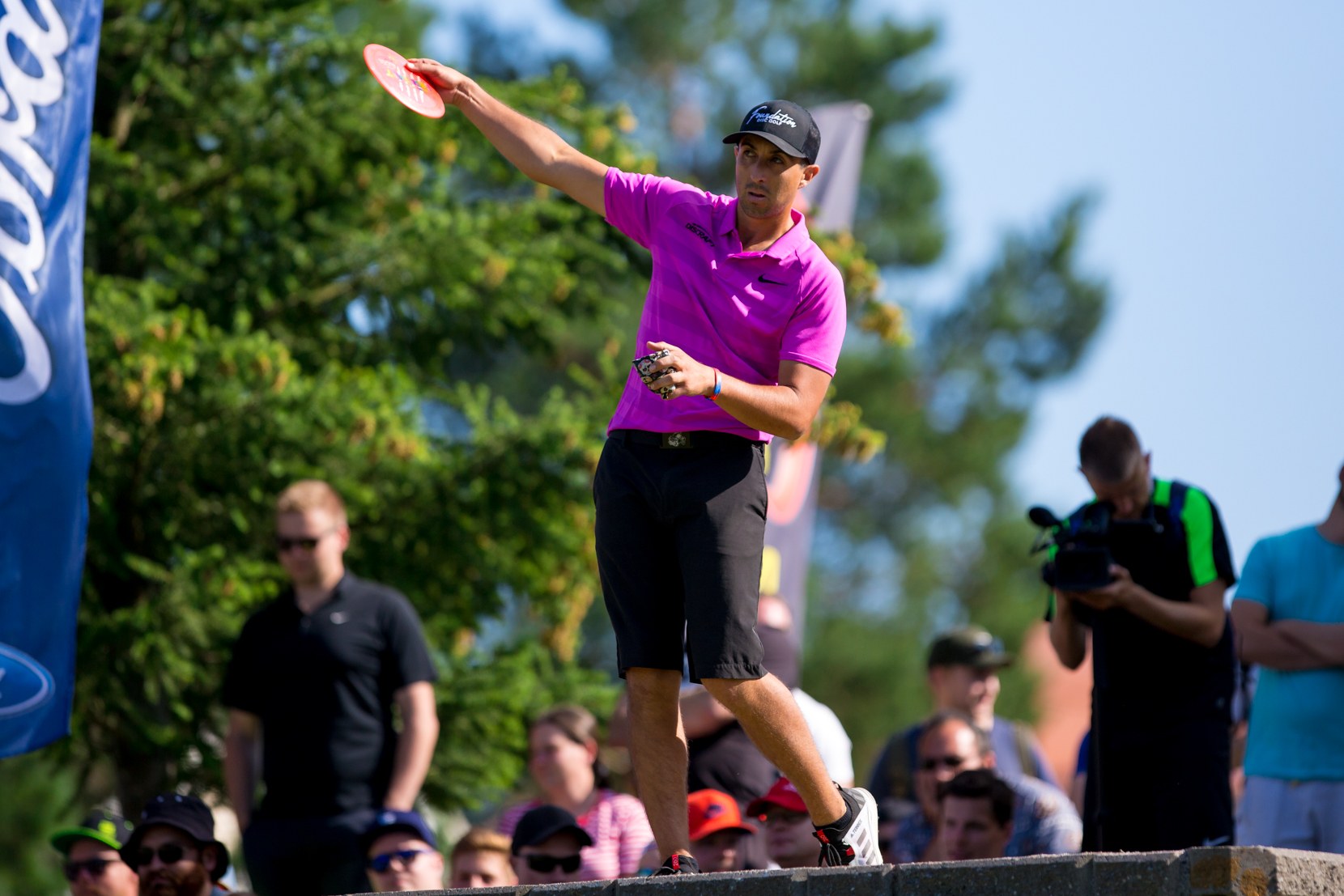 McBeth, who is normally just as at-home here in Finland, lost his groove on the green late in the round. Though none of his misses resulted in bogeys, he failed to connect from inside the circle on holes 11 (at the time, there were some talkative spectators that could be heard on the green), 13, and 18, with the last of those three slipping through the left side of the chains from inside three meters.

Despite a strong performance off the tee that has him leading the field in fairway hits (92%), circle 1 in regulation (67%), and circle 2 in regulation (83%), McBeth knew what he needed to improve most during Saturday’s third round.

“Just don’t give [Wysocki] any more gifts like that on the putting green,” McBeth said. “I missed three in the circle and I don’t think he missed any, and that’s really the only difference right now is those three that I missed. We’re playing about the same right now—I think I’m getting a few more opportunities than he is, especially on the green, so I’ve just got to keep it together and put those away.” 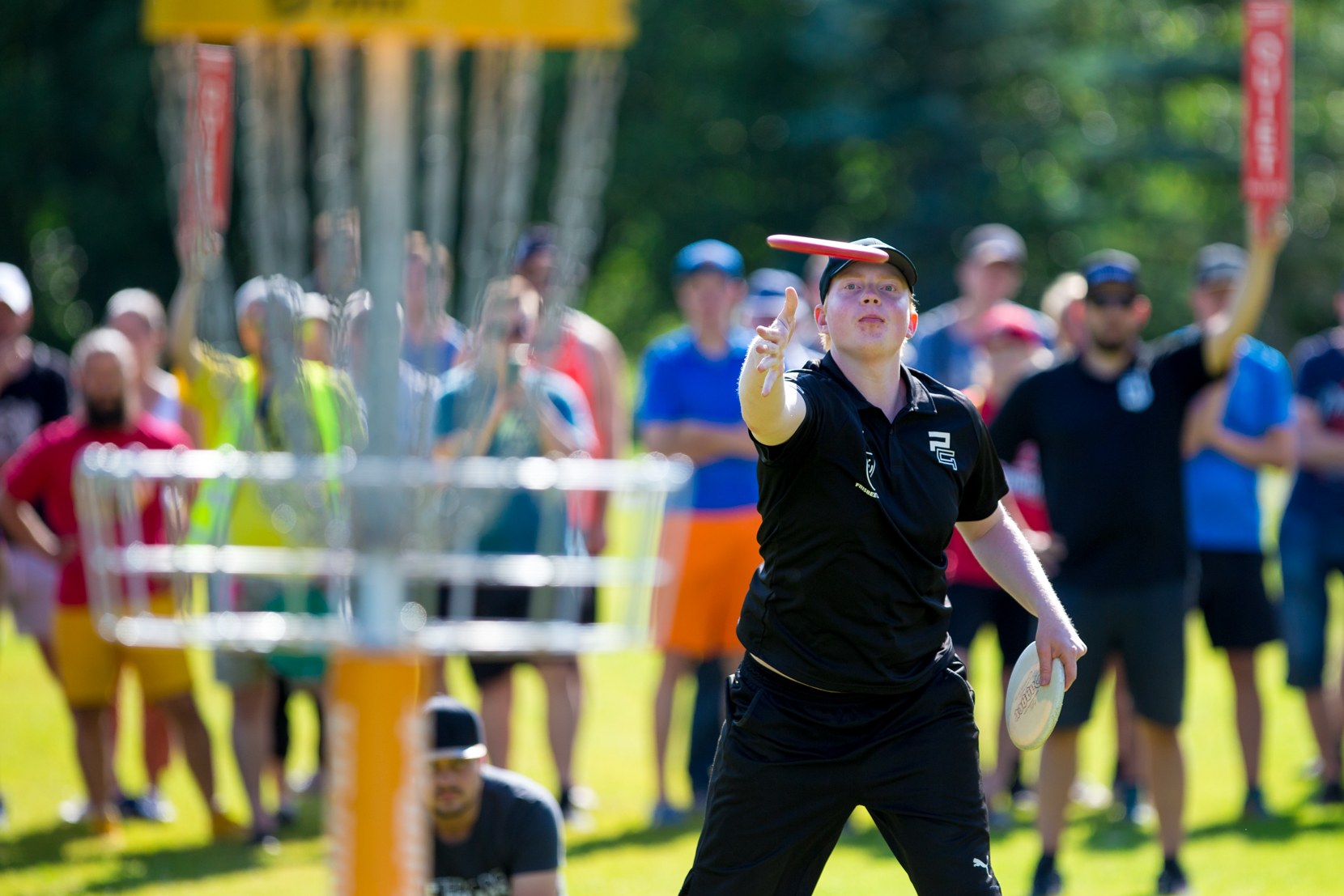 Opening round star Nieminen looked solid in the early goings Friday, keeping a cool head among the warm weather and enthusiastic crowds. But he ran out of gas around hole 10, missing a short putt for birdie, then sputtered even more after his backhand drive on hole 11 faded too early and went out of bounds.

Still in sixth place, the 20-year-old was trying to look at the positives. “Not my day, but not a catastrophic result also,” he said. “Tough round, but gotta keep going.” 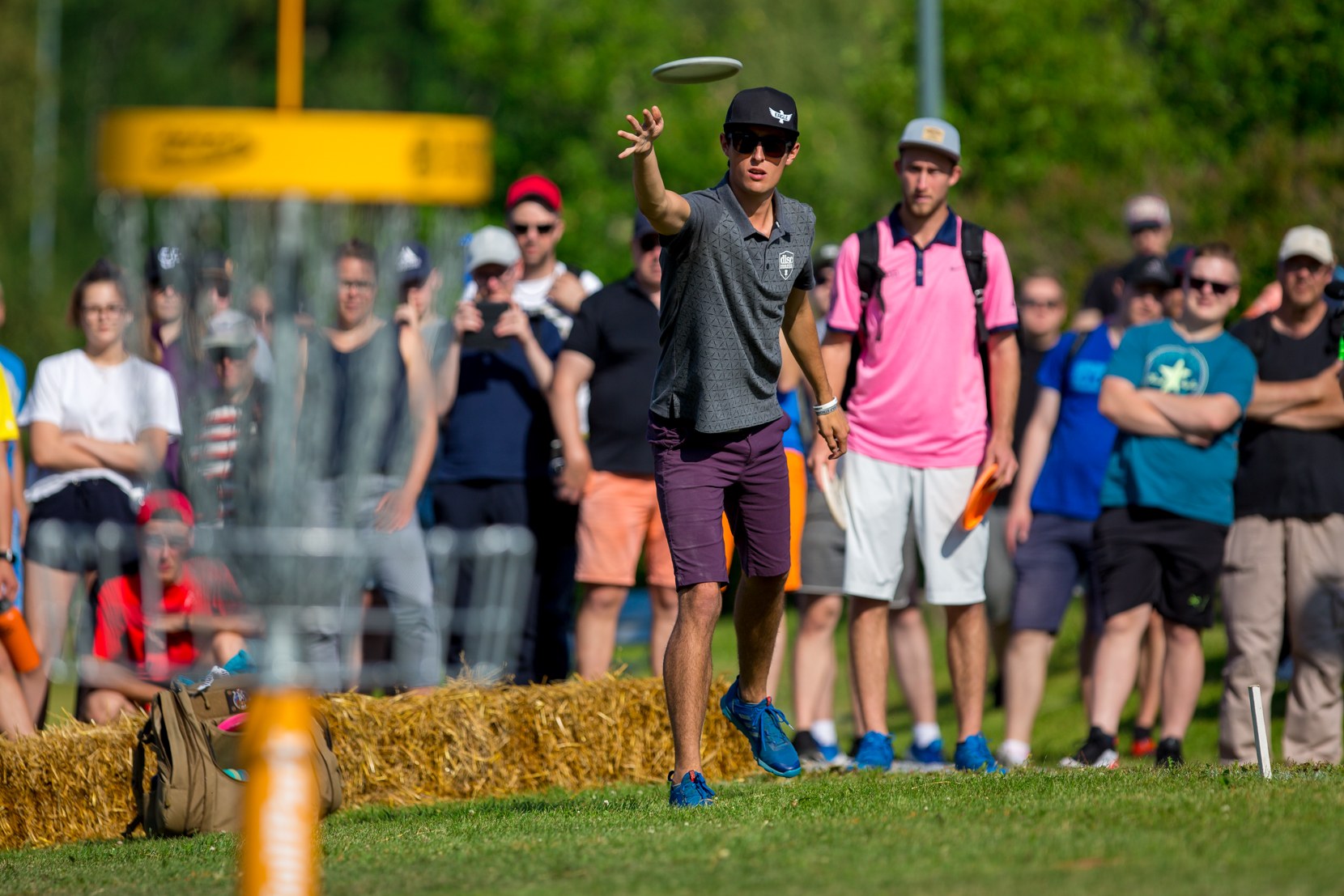 McMahon squandered some late scoring opportunities. First, he misplayed the wind on the downhill, 201-meter 15th—he called it the most difficult tee shot in disc golf—and went OB, then followed that shot with an approach that skittered out to give him a double-bogey 6. His drive on 18, meanwhile, left him with an awkward lie, forcing him to take an aggressive forehand to the pin to have a chance for birdie. The shot had too much juice on it and it skipped beyond the lines, but he was able to save par with a pressure-packed putt from just inside the circle.

“I made it, and I believe that kept me on lead card going into tomorrow, which is really kind of the main thing right now, just to witness this amazing gallery,” McMahon said. “That’s my number one goal right now: Stay on lead card.”

It’s an ideal that motivates every player, but the legendary crowds here at The Beast make the achievement even more desirable. Hannum, who after a practice round on Tuesday said that he, too, dreamed of playing on the lead card at the European Open, accomplished the goal with a bogey-free, 1065-rated showing. The power forehand-leaning former baseball player from Oklahoma tops the field in scrambling with a 90% success rate.

Hannum wasn’t the only player to make a significant climb in the standings. Finland’s Mikael Räsänen jumped up 22 places with a 9-under par showing that put him into a four-way tie for seventh place, while his countrymate Niku Mustalammi’s 26-place leap finds him in 11th. Not to be outdone, 12-time Danish National Champion and fan favorite K.J. Nybo rocketed 30 places up the leaderboard and is tied for 14th with an 11-under par total.

Stat of the Day

According to Event Director Jussi Meresmaa, Wysocki's 22-under par total through two rounds matches the record that Gregg Barsby set at the 36-hole mark in 2017. Barsby ended up finishing the tournament in second place. 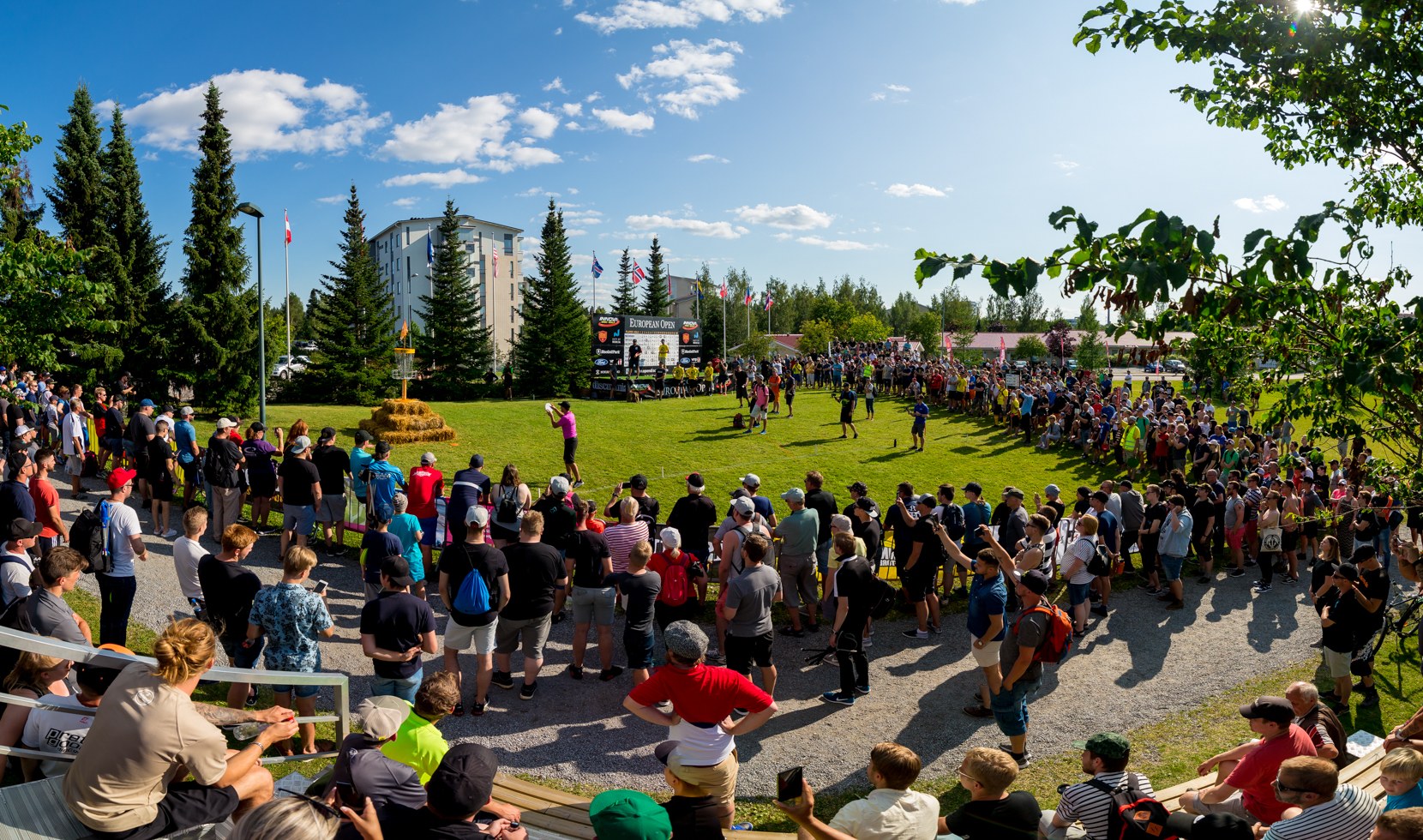 The crowd estimate jumped up to 1,500 on Friday.

After all those shake-ups in the standings, proper moving day is now on tap, as the Open lead card attempts to tame The Beast Saturday at 2:30 p.m. local time. Scores and stats will be available for all groups at UDiscLive.com, with next-day video coming from The SpinTV.