NOKIA, Finland—There was a moment in round three of the European Open on the Open Women’s lead card that seemed emblematic of the fates of all Paige Pierce’s competitors at the PDGA Major. Finn Henna Blomroos had laid up to just a few meters from the basket for an easy par on the 94-meter, (308-foot) par-3 6th. Her putt hit so perfectly, the gallery was already clapping.

Then, the putter spit out, slowly caught edge, and meandered down the sloping green to near circle’s edge. Blomroos missed the comeback, and a simple par became a double bogey. Something that should have worked easily for someone of Blomroos’ talent and skill just…didn’t. And it’s fair to say that’s exactly what the last two days on the Open Women’s lead have been like for anyone other than Pierce.

Despite turning in her worst score of the tournament, a 1-over par 65, Pierce increased her lead by seven strokes over Blomroos to an astounding 15 strokes. Pierce’s three-round total is a 4-under par 188, while Blomroos’ 8-over par 72 puts her at an 11-over par 203. Catrina Allen and Eveliina Salonen are third and fourth, respectively, and both turned in 7-over par 71s today. Their battle for the last spot on the podium is the one filled with the most tension tomorrow, with Allen sitting at a 17-over par 209 and Salonen just two back of her at 19-over par.

“I was trying to keep every round par or better,” Pierce said. “So one off my goal, but I think I’m okay with that.”

And though she rightly feels “pretty comfortable” about her chances of taking home her first Major win of the season after tomorrow’s final round, Pierce isn’t planning to take her foot off the gas.

“I’m still trying to throw the best shot I can throw every time I step up to my disc,” she said. “There’s no need for me to back off because I can be aggressive still and still go for a good rating and improve myself as a player. Every shot’s motivating, especially with Worlds coming up.”

Pierce said her standout performance this week has simply come down to her “course management,” allowing her to get more birdies and take fewer bogeys—and the stats back her up. According to UDisc Live, Pierce is only fifth in the field for fairways hits at 61%, but her 28% birdie rate and 72% scramble rate both top the Open Women’s field. The next closest to Pierce in the scramble department on Sunday’s lead card is Salonen at 49%. 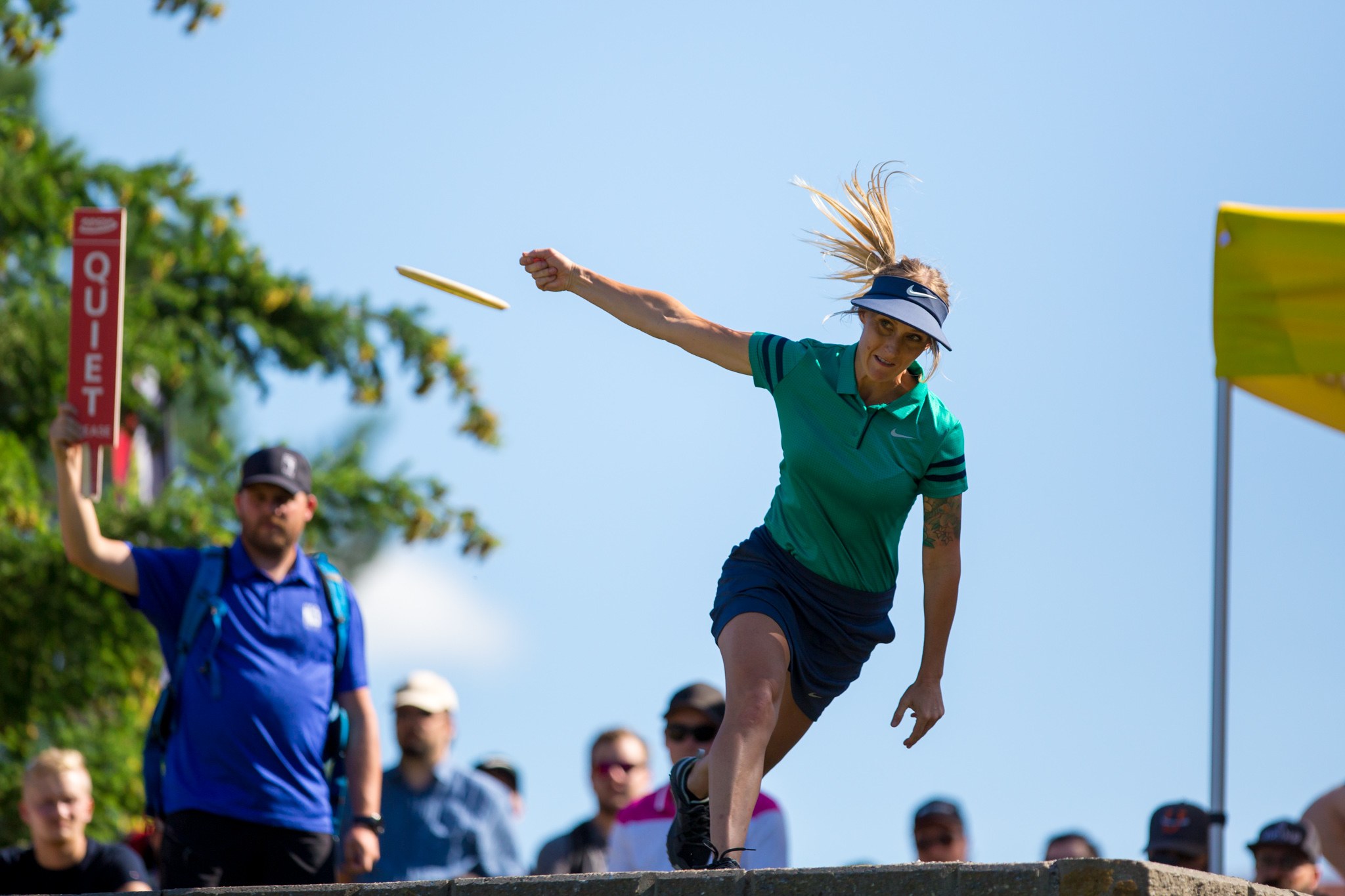 As for Blomroos, Allen, and Salonen, none of them were able to have any long streaks of success. As a group, they had almost as many double bogeys (five) as they did birdies (seven).

Allen was the only one that came close to having a chance to help Saturday truly be a “moving day.” In third place, she had been able to play 1-under through seven holes, while Blomroos played 4-over in the same stretch, narrowing the gap between them to just one stroke after hole 13. That became two after Blomroos finally found a birdie on hole 14 while Allen parred, but second was still well within reach.

Then, like the day before, holes 15 and 16 rained on Allen’s parade. On the par-4 15th, her drive went OB and her subsequent attempt to reach the green for a chance at par didn’t land safe, either, making her opt for a rethrow from her previous lie. The next throw was safe, and she made the putt, but she still ended with a double bogey. On the next hole, it took her four throws to make it into the hay bale-lined island green, and she finished it with another double bogey. The woes continued on holes 17 and 18, with Allen carding two more bogeys. 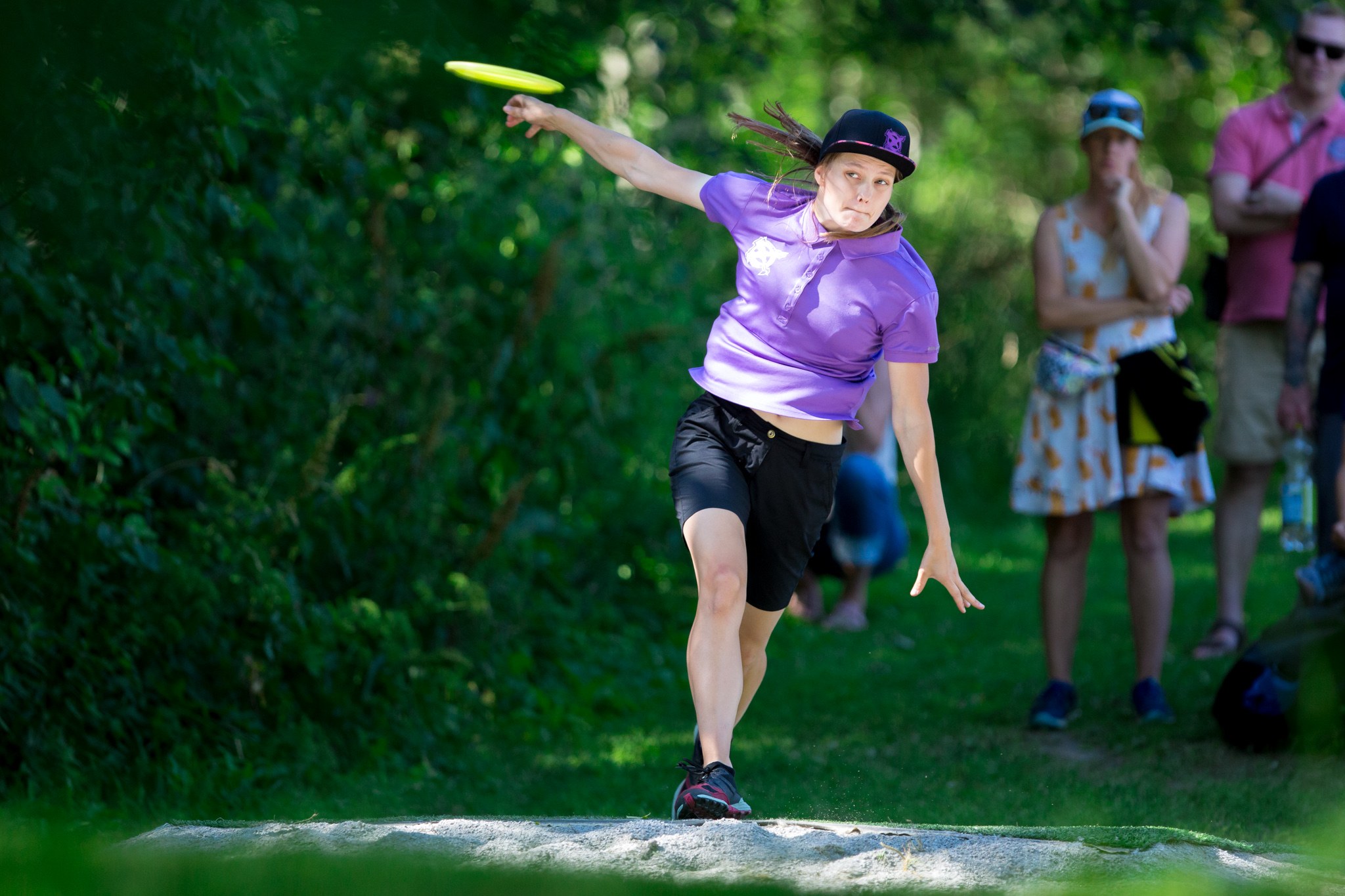 Blomroos had her own troubles in that stretch, three-putting her way to her own double bogey on 15 and bogeying 18. But her birdie on 16 and par on 17 meant that, while Allen added six strokes in the course’s home stretch, Blomroos’ score went up by just two.

Allen, a two-time European Open Champion, didn’t want to speak much about her round but made it clear that her play was in no way living up to her expectations.

Though Pierce’s win seems almost certain, it will still be interesting to see if the unpredictable scores from the women on the lead card continue and generate unexpected shifts in the current line for the podium.