Bogey-free performance puts him one back of Wysocki

NOKIA, Finland—After carding two birdies to start his round, Eagle McMahon sat on a bench just behind hole 3’s tee box here at Nokia DiscGolfPark Saturday afternoon and gazed out at the ribbons of people lining either side of the fairway. Then, breaking away from the steely concentration required to perform in front of that gallery, he took out his phone to capture the scene, in awe of the moment.

A couple hours later, that same crowd erupted in applause after McMahon took to a knee to connect for birdie on hole 18 and finish off a 10-under par 54 hot round that put him in striking distance as he seeks his second career PDGA Major title.

McMahon’s 1064-rated performance Saturday at The Beast brought his three-day tally in Finland to a 27-under par 165, just one shy of current leader Ricky Wysocki, who logged an inconsistent showing but still managed a 6-under par 58 that contributed to his 28-under par 164 total. Paul McBeth scored an even-par back nine and could only muster 3-under par on the day, a rare occurrence that dropped him five off the pace with a 23-under par 169. 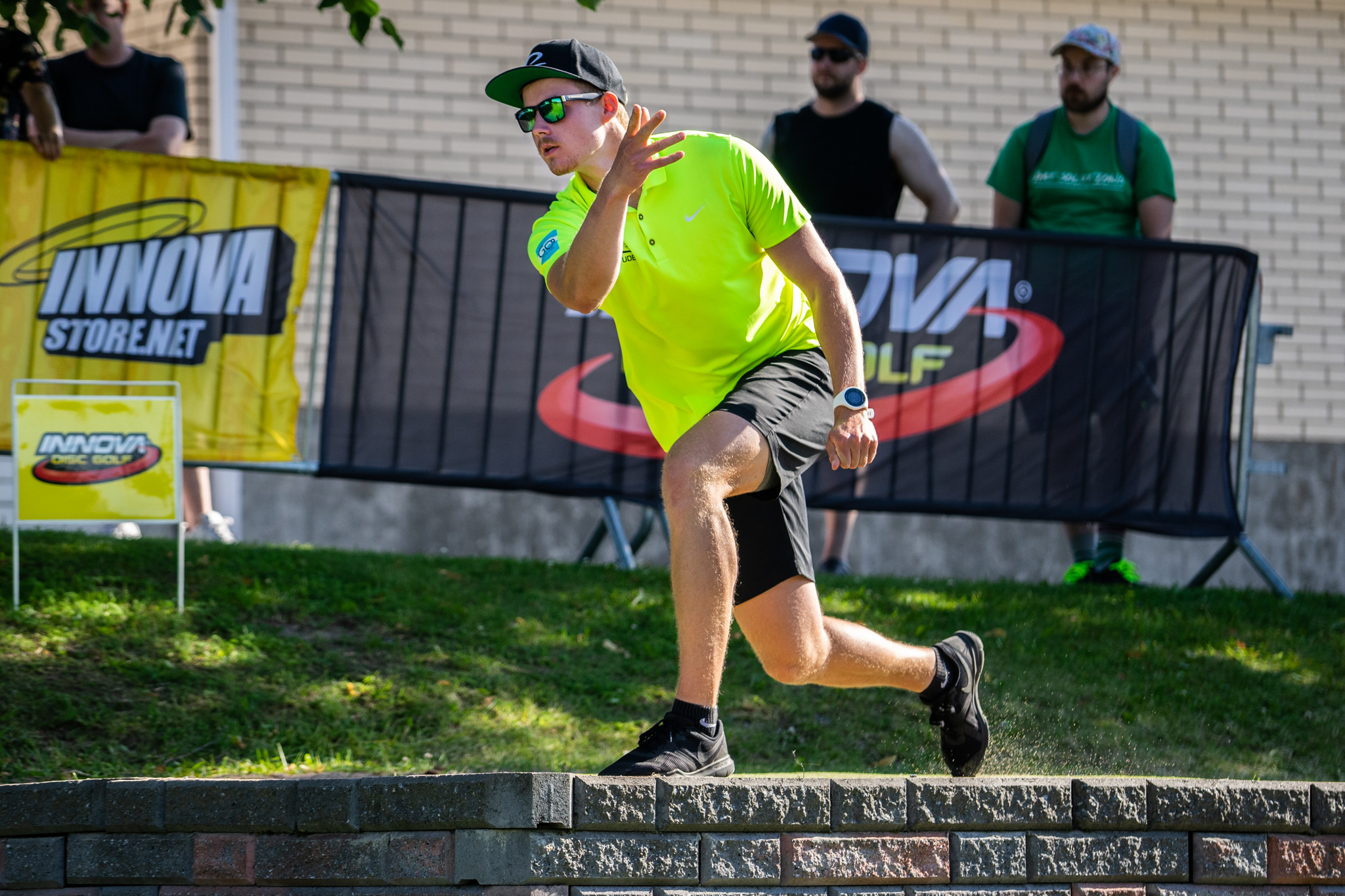 Estonian National Champion Albert Tamm nearly squandered his chance at the final round lead card with a double-bogey 6 on the par-4 18th, but he overcame his “brain fart” and a 4-under par 60 put him in the final round spotlight with a 21-under par 171. A gutsy performance from Austin Hannum, who struggled mightily early on before birdieing five of the last six holes, kept him in the top five with a 20-under par 172 total.

McMahon entered the round trailing Wysocki by seven shots, but that deficit may have actually played to the 21-year-old Colorado native’s advantage.

“It honestly was kind of nice,” McMahon said. “I always joke about this—whenever I’m in the lead, it’s so stressful. Not to say today wasn’t stressful, because it definitely was—we are at a Major, we wanna throw good shots—but not having the lead the entire day was a little bit of a weight off my shoulder.”

That said, the afternoon wasn’t without difficulty. McMahon’s approach game wasn’t as locked in as usual, and he left himself several tester putts. He connected from 15 meters for birdie on the 116-meter 2nd, then saved par from 13-meters on hole 6. There were other standout moments: His surgical dissection of the tree-lined, par-4 12th, where he put a forehand approach to tap-in range for birdie, was one; and that putt on 18 from between the trees had the video production team talking highlight reel.

Though he traded a couple of two-shot swings with Wysocki down the stretch, McMahon said he didn’t notice the volleys on the scorecard.

“It’s really crazy—today I feel like I wasn’t really battling Ricky. It was more of me battling the course,” McMahon said. “I know that sounds really cliché. But I feel like I’m kinda lost in the moment out here looking down the fairway seeing all the people.” 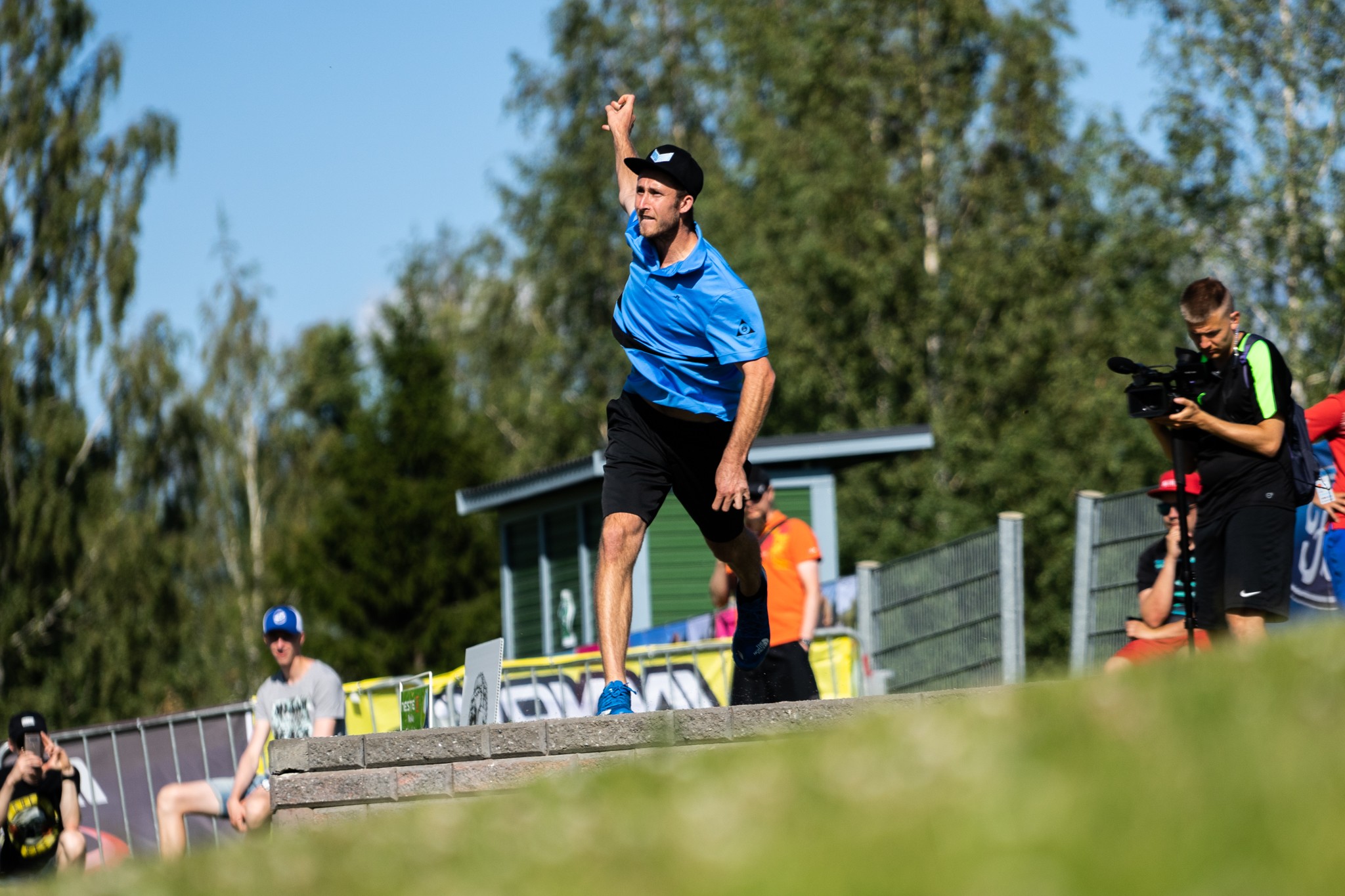 Wysocki, meanwhile, fed off the gallery’s energy early. He started with a run of five consecutive birdies and looked to be pulling away from the card—he was up six on McBeth and nine over McMahon through hole 7—before some errant tee shots sent him back to earth. He splashed the pond on the 120-meter 11thon the way to a bogey, then logged another after spraying his drive on 12 OB and tossing a forehand roller into the gallery as he tried to salvage the hole.

“I lost focus for a little bit,” Wysocki admitted. “I think I was up four or five at that point. It’s sometimes tough to play with the lead. I think tomorrow I only have one stroke—there’s no time to let loose as far as my focus goes.”

On 16, Wysocki was out of position off the tee, and the gravel path found him struggling with his footing. He took three attempts to make the island, with one particularly harrowing shot succumbing to gravity as it bounced, rolled on top of a hay bale, then fell out of bounds. The sequence served as a reminder of when he lost the tournament on that same hole in 2015, but Wysocki wasn’t shy about confronting history—at least for a moment.

“It’s definitely gonna be a tough thing because in the past I’ve ruined it on that hole, but I’m definitely not gonna think about that tomorrow,” Wysocki said. “Tomorrow’s gonna be all focus. It’s gonna be focused on the now and not the past. I think I’m getting a lot better at that, and I think that that’s why I can really put that past me and really execute that shot tomorrow.” 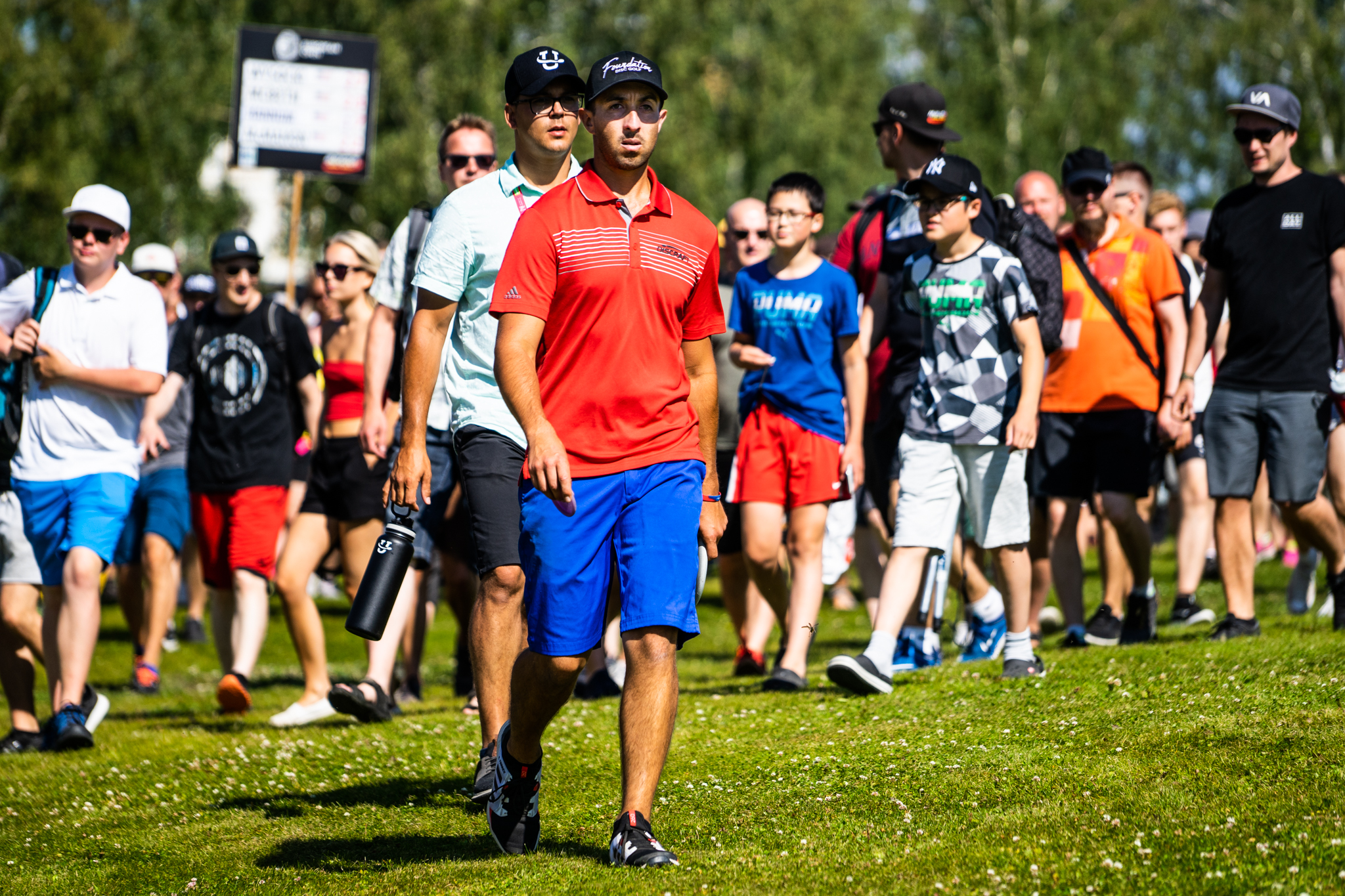 McBeth was disgusted with his round and said he wanted to get revenge on every hole on Sunday.

“It was awful,” the defending European Open Champion said. “It was just a disaster the whole time. I just didn’t throw any good upshots and missed a putt or two in the circle. It was just a terrible round.”

On the plus side, that means the final round could require an activation of what locals call petomoodi: beast mode.

“I just have to attack,” McBeth said. “I think I’ve birdied every hole on this course, so I’m capable of doing it. But now it’s—I haveto do it tomorrow.”

Tamm said he feels like he has a chance to move up in the standings—“This course is kind of [one] that anything can happen anywhere”—but his main goal now that he’s made the lead card is to qualify for the United States Disc Golf Championship. Indeed, the tournament has surpassed his expectations.

“It’s gonna be fun tomorrow. I was just hoping to make the cut,” he said with a laugh. 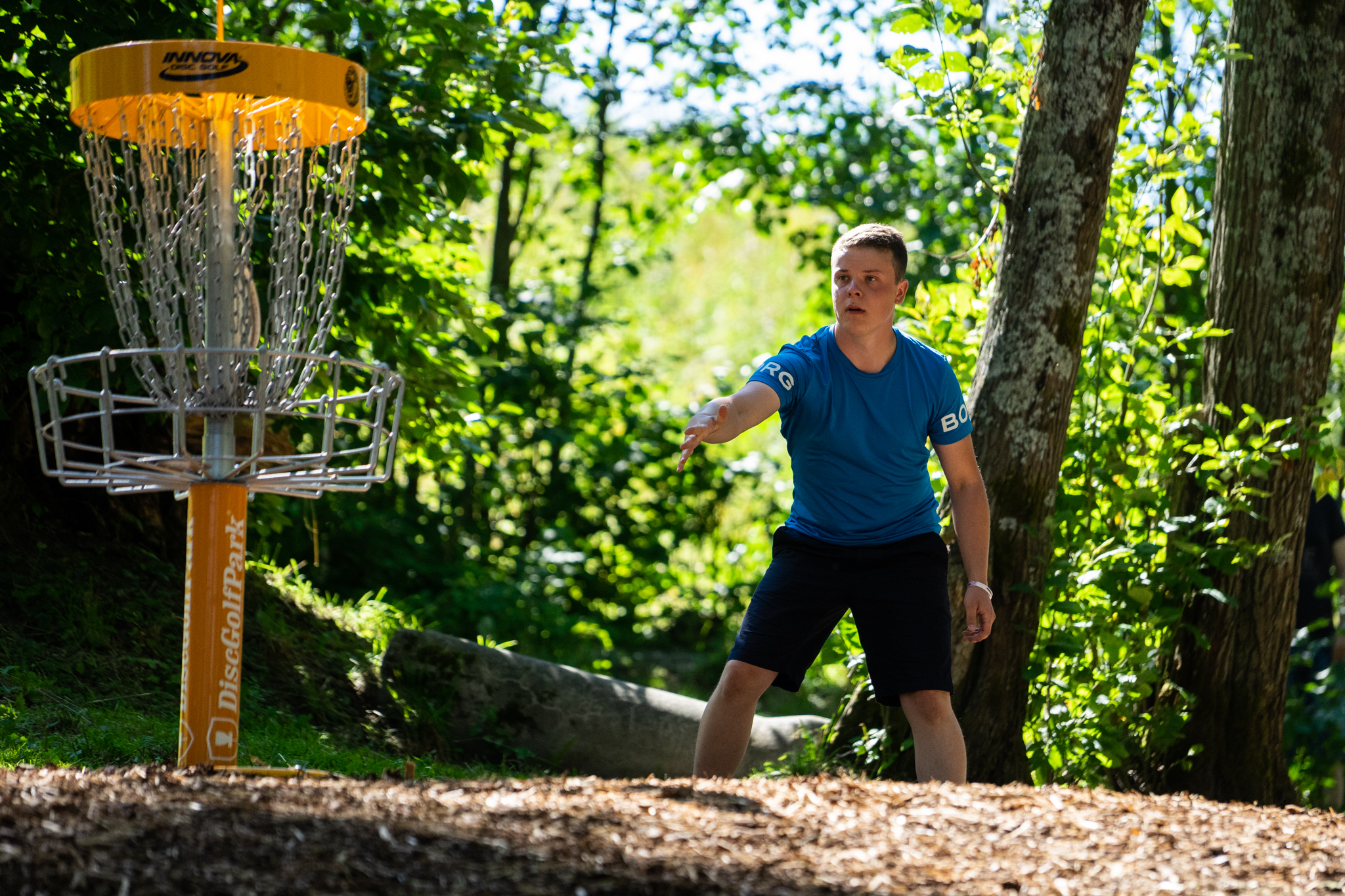 James Conrad and Jesse Nieminen are tied for sixth place heading into the final with 19-under par totals, while Niku Mustalammi and Jeremy Koling are tied for eighth at 18-down. Eric Oakley logged an 8-under par third round to crack the top 10 at 17-under par through 54 holes.

Entering Sunday’s final, Wysocki said he hoped to put on a show for the loyal fans who continue to flock to Nokia DiscGolfPark. And after closing round three with a birdie right near the massive leaderboard that serves as Celebration Central at the end of the European Open, Wysocki was looking to be the one popping champagne on Sunday.

“Overall I’m happy,” he said. “I’m in the lead and I’ve got a lot of momentum going into the final day, so that’s all I can ask for.”

After his day of soaking in the experience, McMahon admitted that his focus would shift from the crowd to the man in front of him on the leaderboard.

“I’m sure tomorrow will be a little bit different since I’m actually in a pretty good position right now to potentially win, so I look forward to the battle that’s in store for tomorrow,” McMahon said.

And then, with a mischievous smile crossing his face, he added: “And good luck, Ricky.”

Today’s head count was estimated at 2,200. The number of shirts actually being worn could then be pinned around 2,175, as several in attendance embraced the miles of sunshine.

With the field cut down on Sunday, the Open lead card can get off and running a bit earlier for the final round. They’ll tackle The Beast at 1 p.m. local time.