‘Every Moment Amounts To This’

NOKIA, Finland—After a perfect drive on hole 4 Sunday at The Beast, Paige Pierce found herself in difficulty: She followed up by yanking her upshot a little right, then bumped a tree and fell into circle 2 on a dangerously sloping green. Despite having a lead in the double digits, she stared down her line with intensity and then launched her putter with a slight anhyzer around a tree into the heart of the chains.

Pierce’s caddie, Tina Oakley, shook her head incredulously and smiled. “She didn’t even need that,” Oakley said. “She just wanted it.”

And, really, since Pierce took an eight-stroke lead after round two of the European Open, her main motivation has been wanting, not needing, to play her best on every hole. Had she not taken a quintuple bogey after not finding the fairway or island of hole 16 five times today—by far her worst series of mistakes of the tournament—she would have turned in the hot women’s round each day.

Instead, Pierce finished with a 2-over par 66, making her final winning total a 2-under par 254, earning her the second European Open title of her career by 17 strokes. Finn Henna Blomroos was runner-up for the second consecutive time at the event, as she carded a 4-over par 68 for the day and ended with a 15-over par 271. Catrina Allen took hot round honors Sunday with an even-par 64 and took the last spot in the podium with a tally of 17-over par 273.

With a lead so healthy for half the tournament, Pierce simply tried to treat Sunday like it was closer.

“I just tried to pretend we were all even, and I had to win this round,” Pierce said. “I think it’s good preparation for future tournaments to always strive for better.”

And the moment on hole 4 wasn’t the only time this philosophy showed itself. Another highlight was when Pierce canned a circle 2 putt from a knee to birdie hole 7, but the last hole of the tournament was perhaps the most memorable.

On the par-4 18th, Pierce confidently hung her driver over OB on the right and watched it hyzer back to an ideal landing spot in the fairway. Her next shot was up a hill lined by both OB and hundreds of spectators, neither of which affected a perfect throw that skipped safe and well inside circle 1. When she put in her putt, Pierce had not only won the first Major for Open Women of the year, but had accomplished something else: It was the only birdie of the tournament on hole 18 out of the entire women’s field.

“Every moment amounts to this,” Pierce said of her win. “Just tapping in and closing out strong, I feel really good about that.”

Pierce also considered how playing in front of the giant crowds with top competition in Nokia was great preparation for the upcoming World Championships.

“I think we’ll have a huge crowd [at Worlds], and I’ll probably be playing with these ladies right here,” Pierce said, referring to her card mates. “It’s a good simulation of what’s to come.” 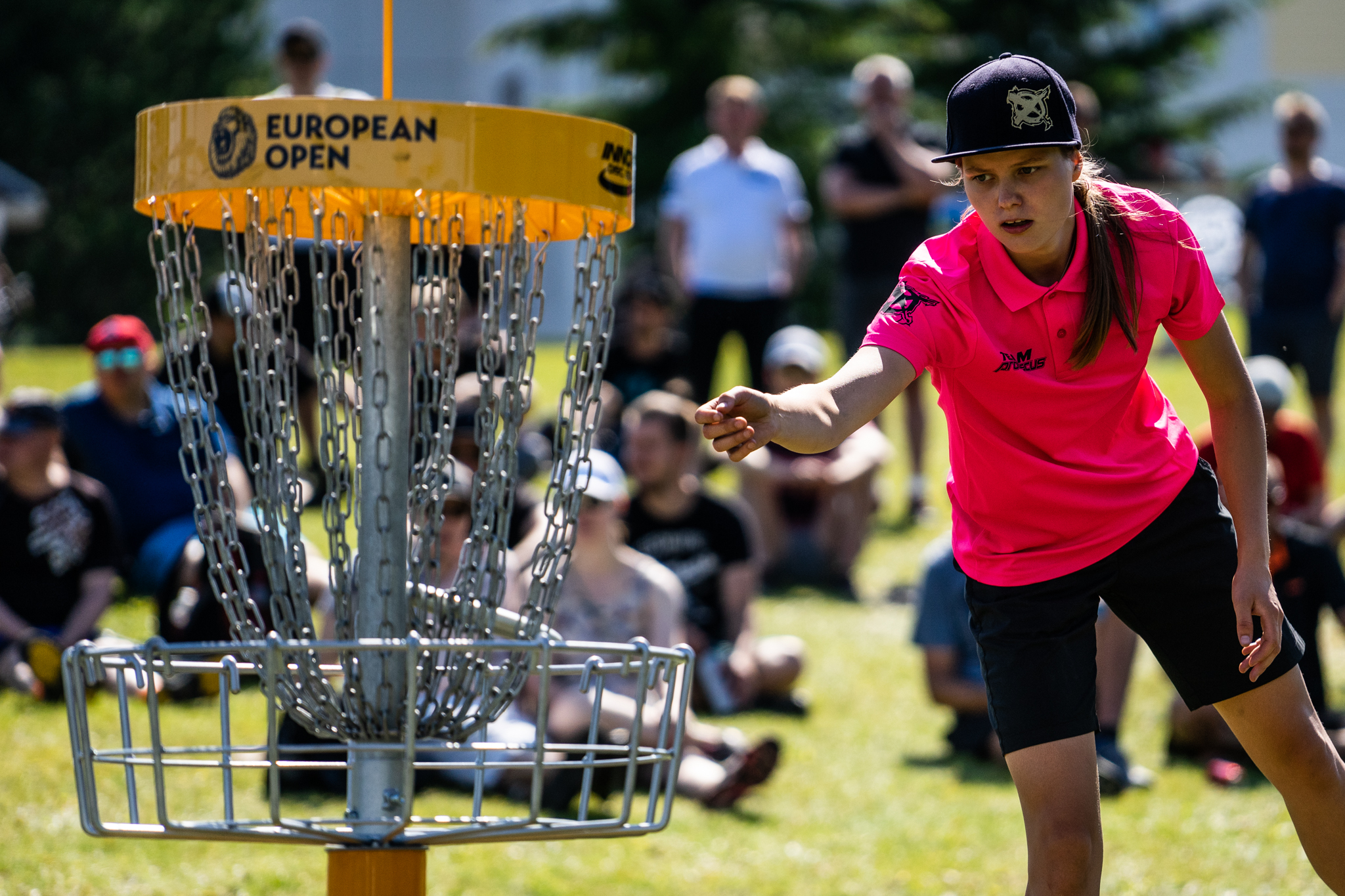 Blomroos was clearly not happy with her overall play, but she did admit that earning second in such a huge event at its last two iterations did feel “a little good.” She also had holes where she showed the talent that’s made her the highest-rated female player in Europe.

The moment that most stuck in Blomroos’ mind was making a big save on the 120-meter (394-foot) par-3 11th, the one hole on the course that has no true line for a birdie and also a basket right beside an OB pond. After seeming to be safe, Blomroos’ drive hopped backwards into the water, giving her a putt for par just outside of circle 2, which she drained.

“I always wanted to take a birdie on that hole,” she said with a little smile. “…[But] the OB par—it felt so good.”

Another interesting moment for Blomroos was a bad kick on the par-4 13th,putting her in the fairway of 12. Instead of fighting through the brush to get to the intended fairway, Blomroos decided to play backwards up 12’s fairway—which parallels 13’s—instead. Though this slightly inconvenienced Simon Lizotte on the card behind, Blomroos’ ploy almost paid off. She was in 13’s circle in three shots, but unfortunately banged what would have been an extremely quirky par save off the top band and had to settle for bogey. 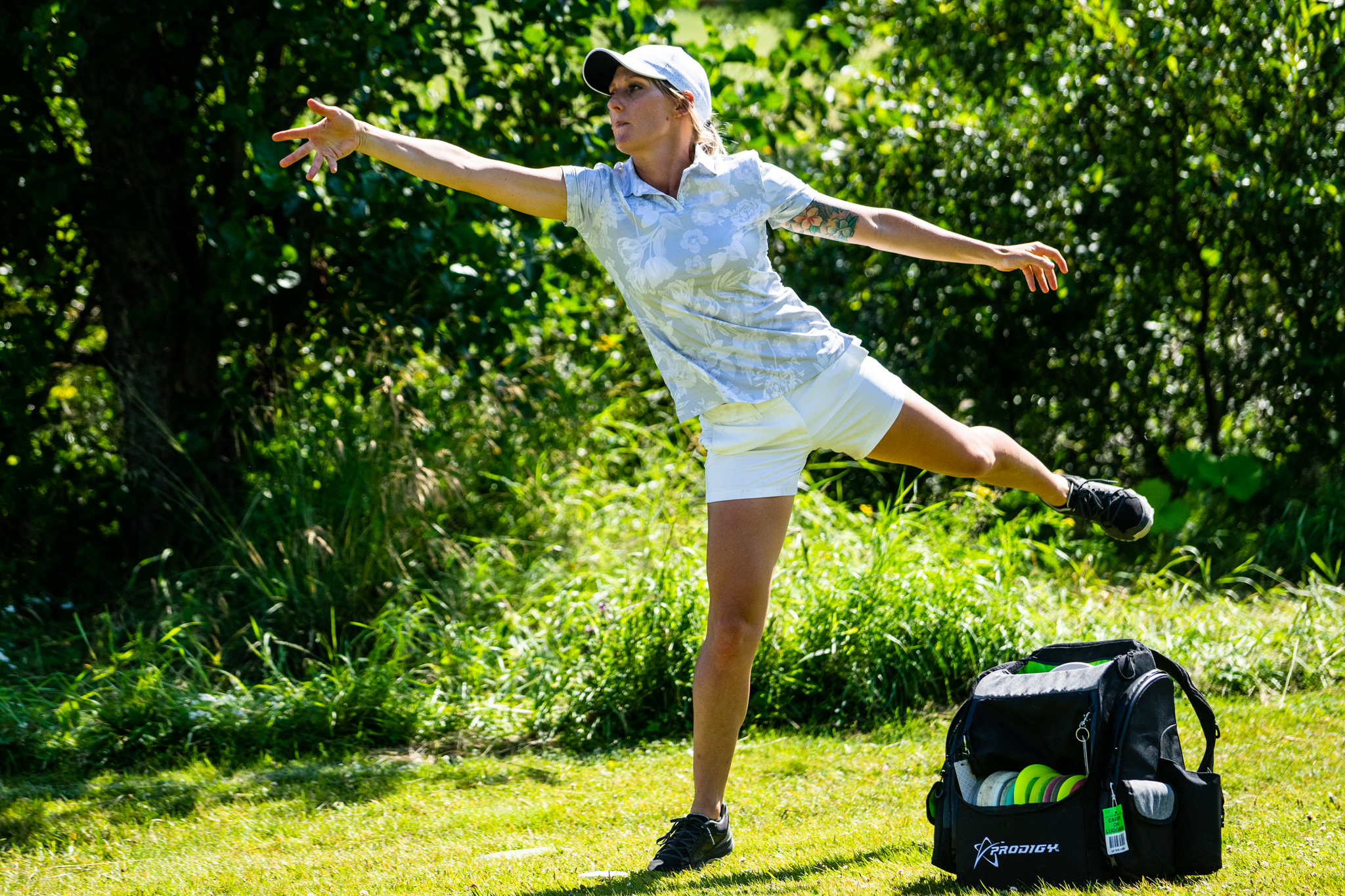 For two-time European Open Champion Catrina Allen, having Sunday’s hot round was likely only minor compensation for a disappointing overall showing in her pursuit of a third. Though OBs did have something to do with Allen’s higher-than-expected scores, per UDisc Live she actually led the Open Women in fairway hits at 71%. Where the true trouble came was with circle 1x putting (putts between 3.3 and 10 meters), where her 63% was just 12thin a field of 20. This is likely an area that she will be working on as she returns stateside for the Idlewild Open and eyes her chance at a second world championship. 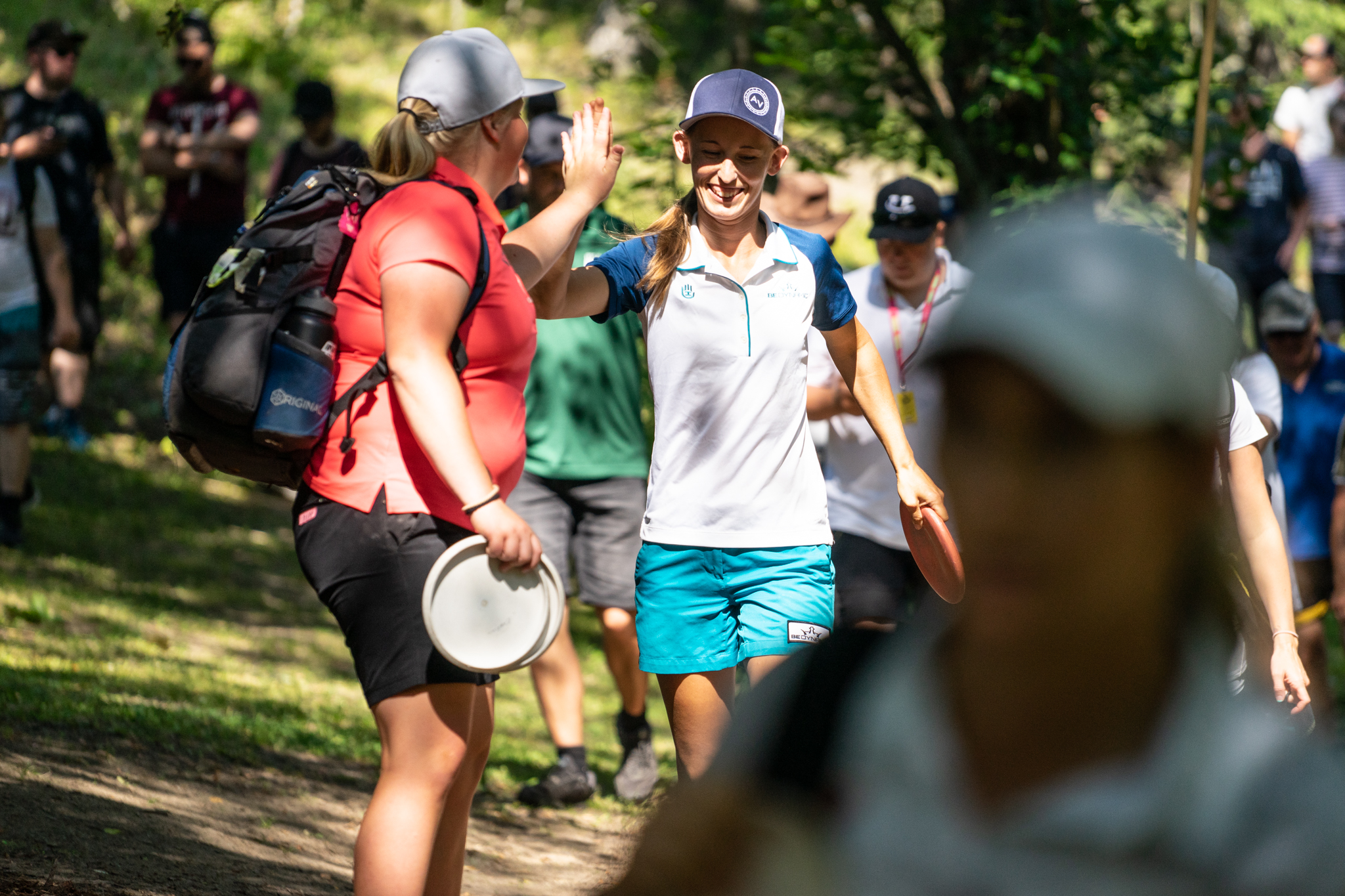 All of the competitors in the European Open’s top three will be at the World Championships from August 13-17in Peoria, Illinois. Fourth-place finisher Eveliina Salonen and Kristin Tattar, who took fifth, will also be in attendance. Surely all of these players are hungry for that honor, and everyone will be looking to prove that they have the skill it takes to be world champion.