NOKIA, Finland—Paul McBeth was already frustrated after a 3-under par performance Saturday that knocked him down into third place, five shots out of the lead heading into the European Open final. But as he walked down the fairway of hole 3 Sunday afternoon, he wasn’t concerned about that round, or the spectators, or even the next shot in front of him. Instead, it was another indignity that chafed the four-time PDGA World Champion: A news article that he read the night before had deemed him out of contention at The Beast, that handful of strokes seemingly too much to overcome.

“They called it a two-horse race,” McBeth said, a tone of disbelief in his voice.

McBeth reads your bulletin board material. He thrives off of it. He keeps receipts. 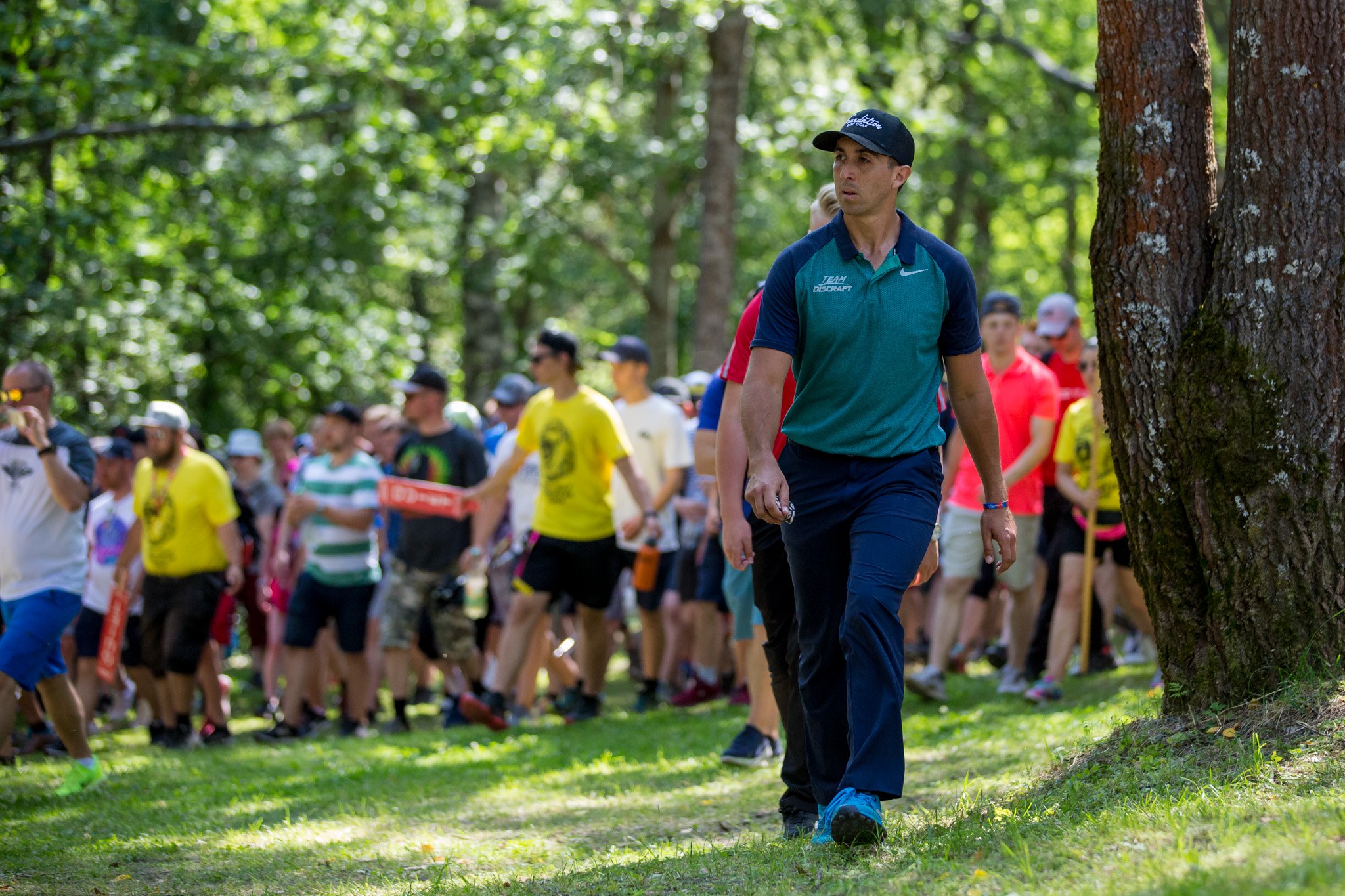 The California native used all of it as motivation during a triumphant final round that found him quickly recovering from that deficit and ultimately popping champagne as a five-time European Open Champion. McBeth’s 10-under par 54 afternoon in front of an estimated 3500 spectators was nearly flawless and brought his four-round tally at Nokia DiscGolfPark to a 33-under par 223. That was enough to oust Eagle McMahon, whose headache-filled 4-under par 60 kept him in second place with a 31-under par 225. Ricky Wysocki slumped to a 2-under par final round that dropped him to third place, a spot he shared with Estonian National Champion Albert Tamm, who wowed on the lead card with a 9-under par 55 that led to a 72-hole score of 30-under par. Jeremy Koling and Jesse Nieminen rounded out the top five at 28-down.

McBeth took home 5,500€ for his efforts. It was his 14th career PDGA Major victory.

“Having more fuel to the fire is always great for me, so when I read that [article], it made me mad,” McBeth said as a sea of spectators stood behind him before he accepted his silver European Open trophy. “I took that into today.”

It was clear from the outset that McBeth was determined to clean up his miscues from round three. After ending up with a 55-footer through a small window for a birdie opportunity to open play, he just missed off the chains. That gave him a boost from the jump.

“I was like, ‘If I’m gonna be getting that close on putts like this, it’s gonna be a long day for them,’” McBeth said.

His forehand was laser-like on the 116-meter 2nd and fell within tap-in range, and after lamenting Saturday that he was too soft on his upshots, he parked the par-5 on hole 3 and par 4 on hole 4—the latter after an amazing roller put him in eagle range—for easy birdies.

“I had about an 80-footer and just barely hit the cage,” McBeth said. “I knew if I just kept giving myself those kind of opportunities it was gonna be a great day.” 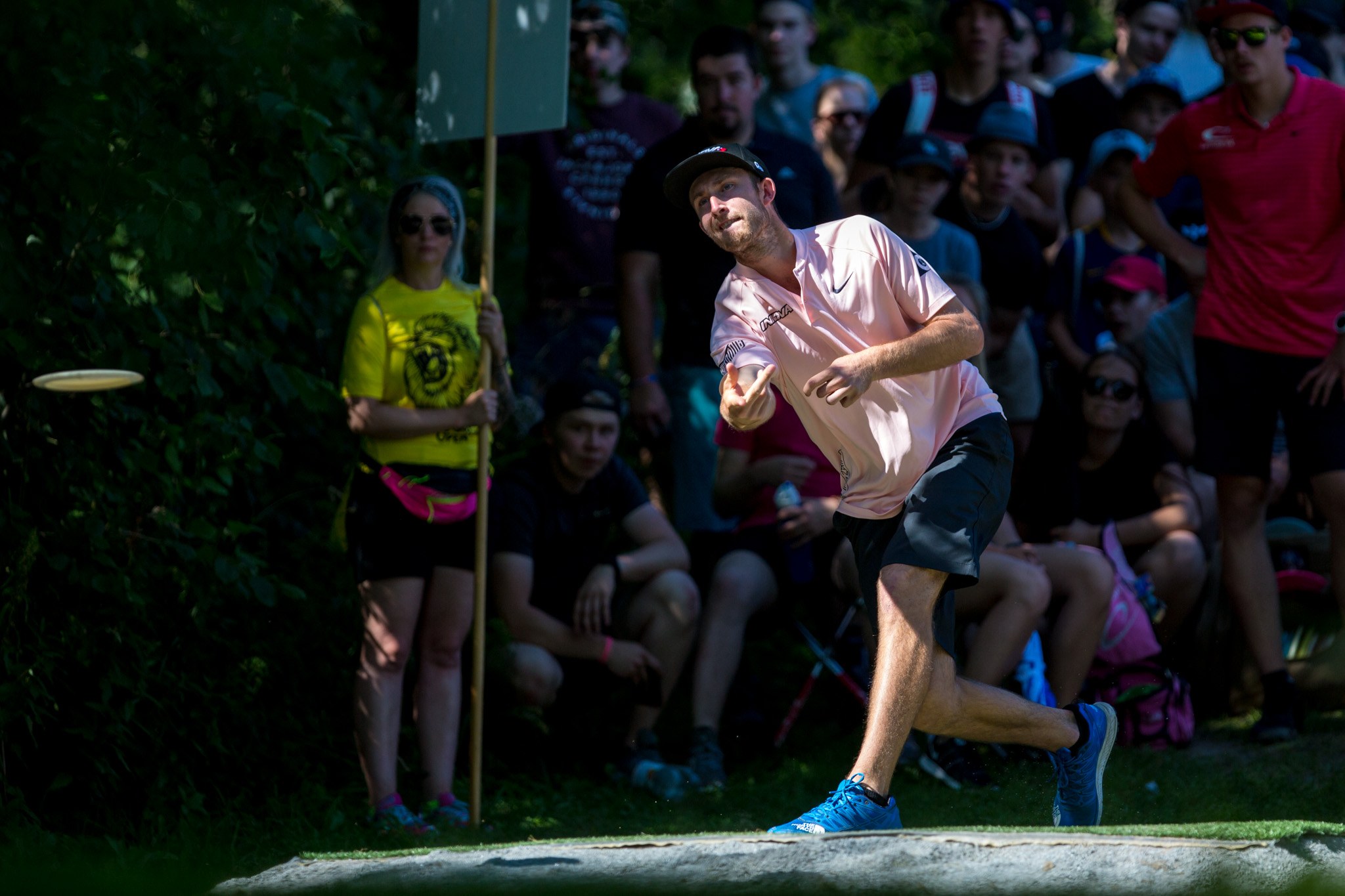 At the same time, the two horses in front of him came up lame out of the gates: McMahon lost his footing on his second shot on hole 3, sending him spinning to the ground in a twisted pile on the way to a double-bogey 6. Wysocki found tree after tree on holes 4 through 6, scrambling miraculously but ultimately losing ground.

By the time McBeth parked another drive—this time on the 103-meter 9th—he had shaved four shots off Wysocki’s lead. And when Wysocki came up just out of bounds, too deep off the tee on hole 10’s downhill crush, it left McBeth an opportunity to tie. But it was about to get worse for Wysocki: He failed to connect on his bogey save from inside the circle, and he carded a double-bogey 6 to McBeth’s birdie 3.

Petomoodi, it seemed, had been activated.

“I was able to get the lead pretty early, which I wasn’t expecting that,” McBeth said. “So I had to change my mindset to all of a sudden I’m in the driver’s seat—I need to perform here at the end and not worry about what they’re doing.”

And that’s exactly what he did. After coming up short of the OB pond on hole 11, McBeth connected from 16 meters for a birdie that put him two clear of both McMahon and Wysocki. He then maintained control with a par-birdie combo on holes 12 and 13, while his closest competition continued to falter.

Though McBeth went OB left on 15’s difficult tee shot, so did McMahon and Wysocki. And when McBeth and Wysocki both hit the island safely for birdie on 16, McMahon missed short and lost another stroke. 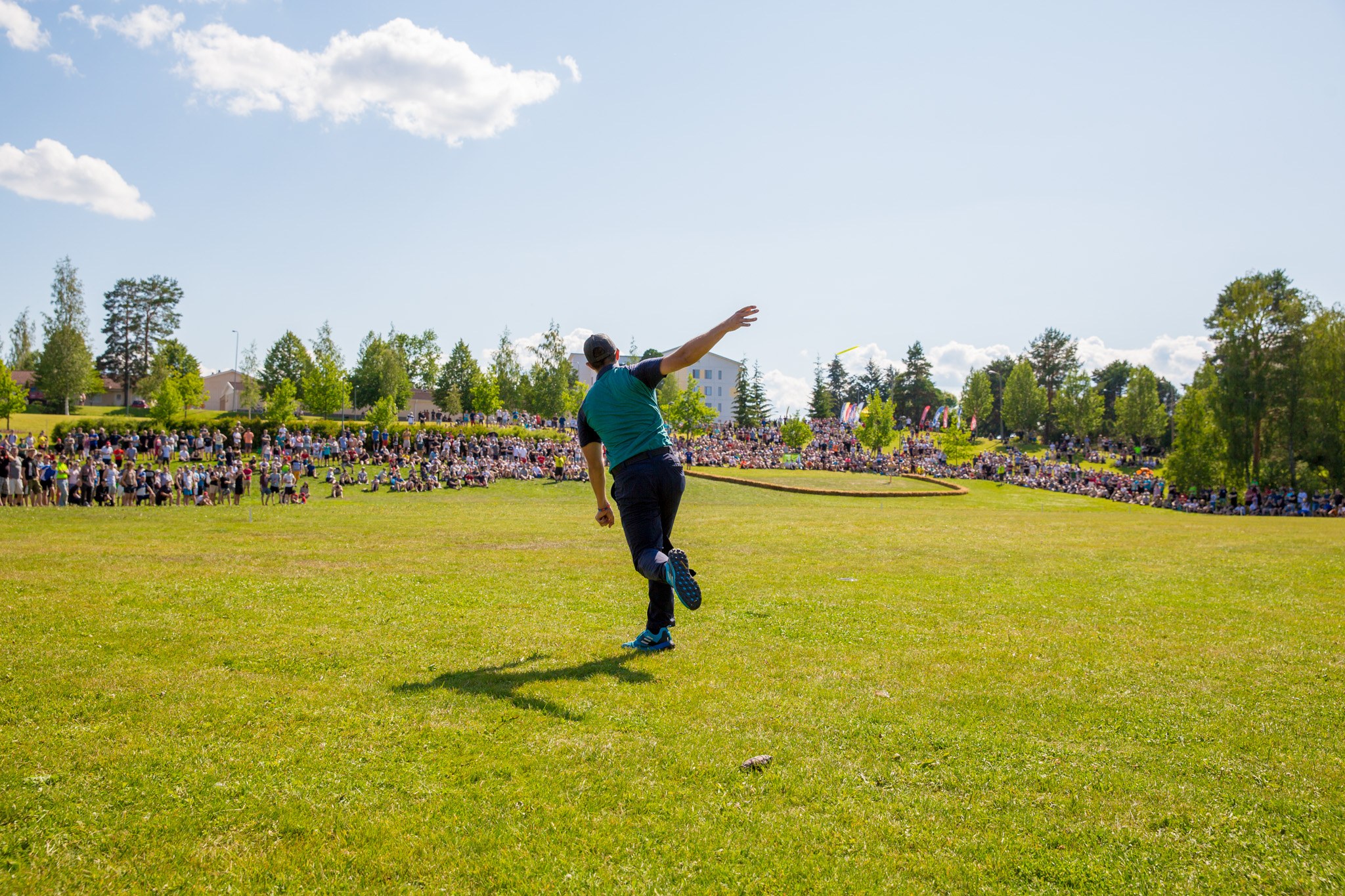 By hole 17, McBeth was up three on Wysocki and four on McMahon. He was able to lay-up on the next two holes and cruise into the stables as the champion with what he deemed his best career showing here in Nokia.

“Being back five to Rick and four to Eagle—those are two of the top three players in the world, so I mean it’s a great comeback, and it’s something I really enjoy doing,” McBeth said. “Being in that position adds a little tick to me that makes me play better. It was a really good one, and this one’s really hard to win. It’s every two years, so being able to do that, it’s an honor.” 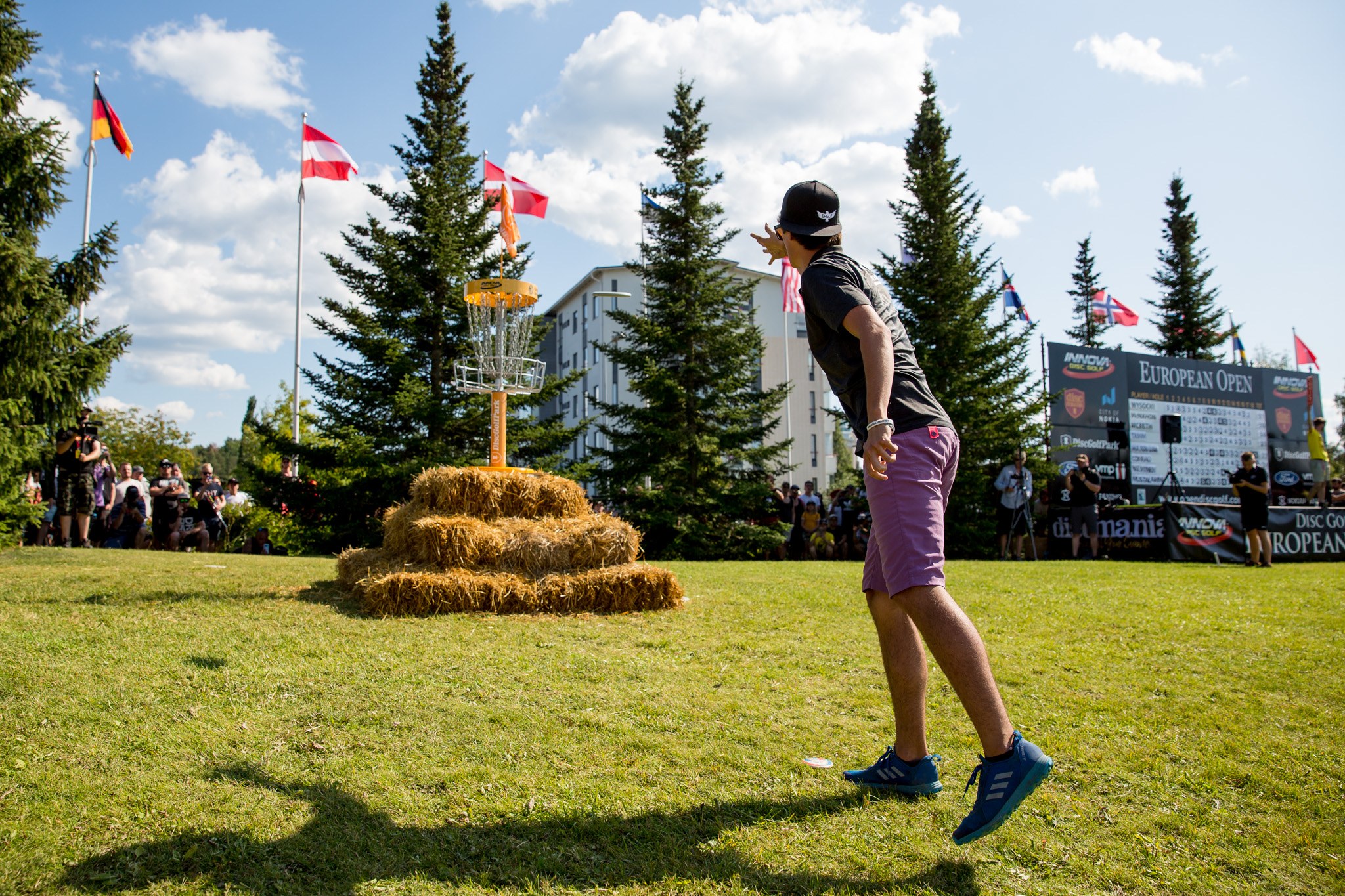 Considering how his early round went, McMahon was more than pleased with being able to secure the runner-up slot after Tamm and Wysocki both put their second shots out of bounds on hole 18.

“That was a perfect opportunity for me to—no pun intended—swoop in at the end and get second,” McMahon said. “Which, after certain holes and certain feelings I had today—second’s fine by me.”

McMahon said he’ll spend a week back home in Colorado before heading to Peoria, Illinois, for the PDGA Professional Disc Golf World Championships the second week of August. It’ll be time for him to recharge both physically and mentally.

“Today, I can honestly say I was not ready to win another Major,” McMahon admitted. “This is exciting because I am up near the top right now, but I have plenty of room for improvement.”

Tamm, meanwhile, was a revelation on the lead card. The 21-year-old never let the moment get too big, staring down a 9-meter putt for birdie on hole 1 to boost his spirits. Undaunted by the huge gallery that lined hole 2’s fairway, he then laced a smooth forehand that he parked for another deuce. He was 3-down through the first three holes and almost splashed a skip eagle on hole 4, but his approach clanged off the cage and rolled down a hill, and he was unable to convert for birdie. Still, he remained calm and collected and was only a couple missed putts away from contending for a higher spot on the podium. The performance had him feeling like his young career was on the upswing.

“Probably it will go like tchoot from now,” he said, pointing his finger toward the sky. “I don’t know, I kind of have to settle down for a little and think through what happened and why it happened. But I think it’s gonna give a nice boost toward the next event.”

Tamm was one of five competitors whose performances earned them a spot at October’s United States Disc Golf Championship. Does he plan to make the long trek overseas?

“Hell yeah!” he said, a wide smile on his face.

Nieminen ended up as the top Finnish player this week and he, too, emerged with a USDGC berth. He also nabbed an ace with a forehand drive on the 112-meter 14th that was a big factor in his 9-under par Sunday:

Before McBeth shifts his gaze to Pro Worlds, where he’ll seek a fifth world title to sit on the mantle alongside his fifth European Open trophy, he shared what he thinks the true meaning of petomoodi is.

“If I quit, I already know the result,” McBeth said. “And I’m one for the unexpected.

“It’s kind of what I think a lot of people experienced out here.”